Flash Fiction: Paisley and her Plethora of Peppermints 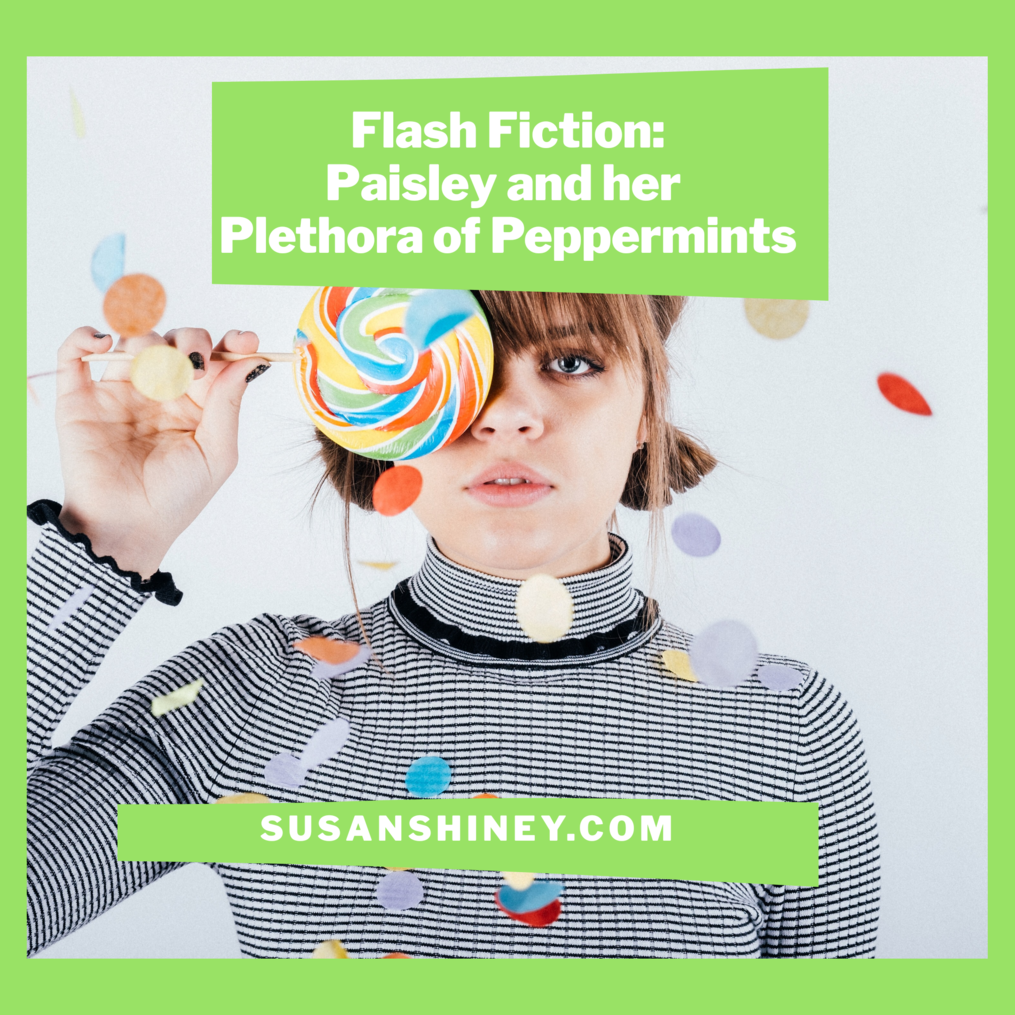 Paisley McKaley was so sweet. So sweet in fact, little peppermint candies fell from her at random moments through out the day. One might fall from her hair when she put it in a ponytail for P.E., or drop from her sleeve as she took notes in history, or escape from the bottom of her pants when she itched her calf in english. Russian literature tended to make her legs all tingly.

The boys always fought over who gets to jump on the candies to crush them, crumbling them into minty powder. They never tired of this game. Never. Ever. The squealing of seagulls erupted as they descended on the dessert sprawled out before them on the quad where she ate at lunch.

No one teased Paisley McKaley for being a living candy dispenser / bird feeder. Her kindness to the other students made them see her as untouchable. Every time one of her collegues forgot their homework, Paisley would let them copy hers. Didn't have your lunch? Paisley brought extra of everything she ate, just in case. No date for the dance? Paisley was a natural matchmaker and had a notebook filled with personality and compatibility charts for every student in the senior year class.

At first, she didn't mind. The only slightly problematic thing was, or so she thought at that time, she just didn't get to read enough. Every time she opened a new book she would fall asleep. Every. Time. She even had a swollen nose for a week once because its spine punched her.

She thought she could ignore it. She did ignore it. Time flew. The needs of others always overtook her own. One day, when she came home from school after helping a friend redesign her locker collage, she saw a dark cloud had formed over her house, while the rest of the neighborhood had blue skies. She paused and thought it slightly strange, but continued falling asleep with a book acting as the hardest pillow ever.

One morning, Paisley woke up to find it was raining, droplets covered her window. When she had breakfast in the kitchen she saw it was a sunny day there. She went back to her room and rain was still dripping down her pane. Her shoulders shrugged, and she still continued her bookless overly pepperminted life.

When the pandemic hit, the down pour became a sprinkle as Paisley was always stuck inside. Paisley McKaley's friends would still call and ask for favors, ¨You can wear a mask and ride your bike over, I need help decorating my study area at home,¨ Lindy begged.

Paisley took a look at her bookshelf, the collective patterns on the spine created a sad face. She imagined riding her bike as cats and dogs followed her fighting over the trail of mints she left behind.

An itchy feeling started in her throat, collecting strength as it rolled off her tongue, ¨No.¨ The cloud above her house released a thunder and lighting crashed. The downpour halted. Paisley jumped to her window and looked outside and blinked as the forms were clearer without her typical water soaked view.

She blamed it on her her parents, at first. ¨I can't leave, my mom is high-risk because of her diabetes, I have to stay home.¨ What could they say? They just accepted it. Hopefully the phantom disease would never come to fruitition for her mom's sake.

She reorganized her bookshelf alphabetically and then by color and read two books a day, while still making sure to attend her online classes, of course. Each passing day the cloud above her house got smaller, until eventually there was nothing left at all.

When the pandemic ended. Paisley continued to say that funny little word that carried so much power, no, when she could, when she needed to, and even funny enough, when she wanted to. The blaming of her parents ceased, as did the apologies, she just said what she felt. Occasionally there was a yes, but much much less than before. Her Goodreads goal for the year was met and she even doubled it!

A rainbow grew over her house, increasing its vibrant color and transparency with each assertion Paisley made. It stayed over her house until she left for college.

Peppermint candies still poured from her every once in awhile just the same. She realized the sweetness to herself was just as important as the sweetness shown towards others.

A Tale of Two Magical Masks

Story Snyopsis: Amy Remy made two masks, one for each of her grandchildren. They were infused with protective magic, but the outlook of each wearer was very different.