Flash Fiction: So, I'm a Gothic Cathedral that Moved to California 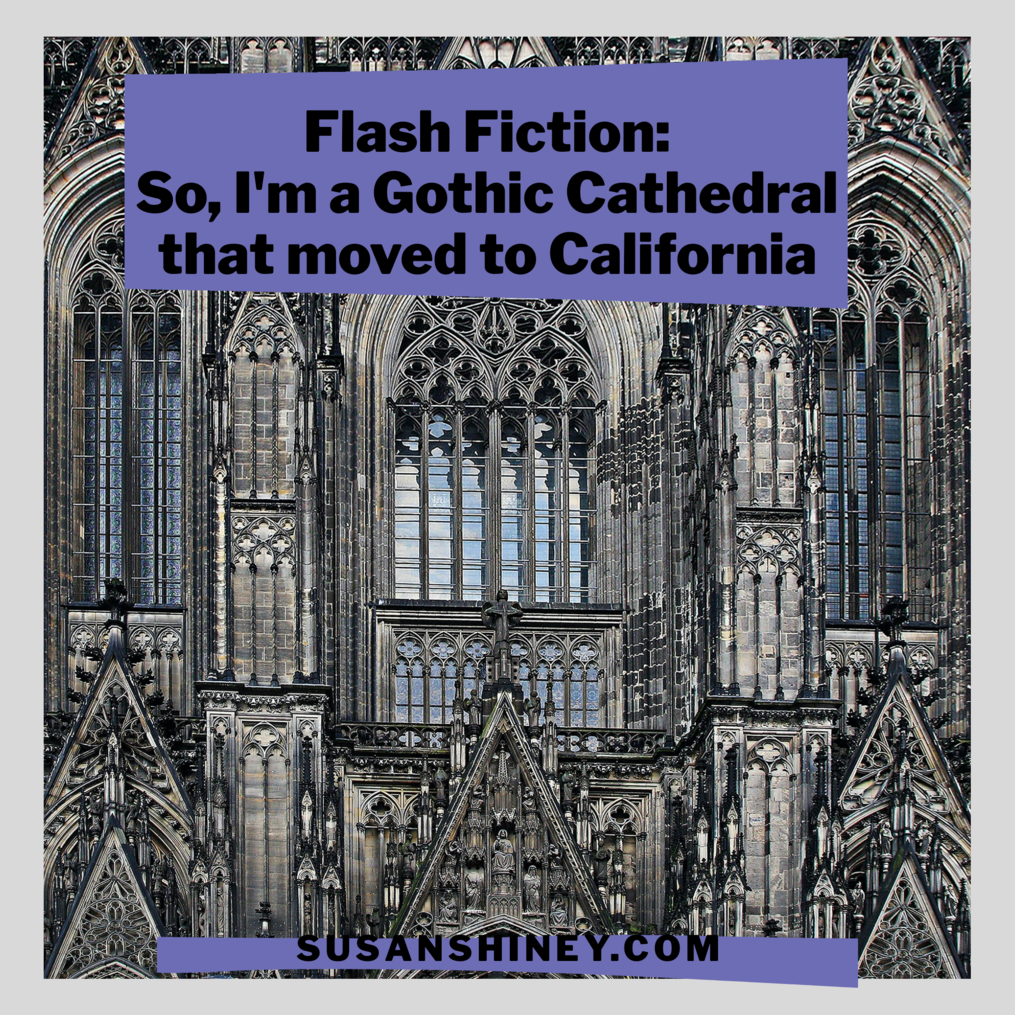 I had been wanting to move to California for half a century. The tourists roaming my aisles would always talk about the weather there. They had either just been or were planning to go there next. The cold of Northern France's winters would make my flying buttresses smart like nothing else. A mystical land of warmth all year round for my aging foundations. The Californians that visited me would oogle my age, saying where they came from nothing looked like me, I would be unique.

Then it happened. My cousin the Notre Dame de Paris caught fire. Her roof burning flickered in my rose window from hundreds of kilometres away, but I could still see it and feel her cries. Life is too short.

The historical society I made the request to immediately told me it was not possible. "You are too big," they said. "It simply isn't done," they said. But, I knew the truth, they didn't want to deal with the paperwork and bureacratic nightmare. I get it, I am sure the phone calls and innovativeness of my relocation were difficult for them, but that simply wasn't my problem. I had made the community a fair share of money over the centuries and I had earned my retirement.

So, my doors got rusted shut. My stained glass windows stopped allowing the sun to shine through leading to pitch blackness in my nave. The heat of my frustration brought in a humidity that made all of the benches and artwork on my walls peel. I was totally uninhabitable and unvistable. The smell of my rotting insides released through my towers and spires and blew over the neighborhood. My organ played at three in the morning off key, of course. The other buildings started to complain. Well, I did ask politely in the first place, you know.

Six months later, my transfer was approved. The president of the historical society took credit for the idea saying he wanted to build a relationship with the U.S. and felt sorry for their lack of historical buildings. They would put a museum in my place with photos documenting my travel, the splitting me up in pieces and putting me back together, also videos of Californians commenting on me living there among them. The museum ended up having more visitors than I ever did, you're welcome.

Yes, traveling in six different planes, not to mention being disassembled and reassembled was quite uncomfortable. But, I kept the long view in mind. I was going to be beach front property.

It turns out there was a great bidding war for where I would be reconstructed. I knew they would think I was special. Sunset Beach, CA won and a couple of celebrities donated their properties in the interest of giving the community a sense of history. I have heard whispers of cancel culture and getting in the good graces of the public, but I don't follow that sort of rubbish. They tore down the celebrities' houses and there I stood.

Yes, I blocked the ocean view of a couple buildings behind me and I was nervous about their retaliation. However, they said it made them feel like they were in Europe and they didn't mind having only a view of me.

The buildings in my neighborhood are mere babies and ask my advice all of the time, I don't mind though. They say I have already lost my accent and sound like a Californian. I practiced regularly while I was striking in France against the historical society. I spend my days now watching the tides come in and out. So many surfers and paddleboarders. The seagulls scratch my roof when it itches and act as my duvet as their feathery bodies sleep on me at night to keep me warm. I can't believe how my tolerance for cold has disappeared so quickly. My upkeep takes a bit more energy with the salty air and intense sun. I don't care. I just soak it all in.

My visitors that walk around my aisles now, funny enough, mostly talk about going to Europe or France one day. It is almost like they don't appreciate the weather here. I have to be careful not to listen too much, it makes me homesick.

Story Behind the Story: 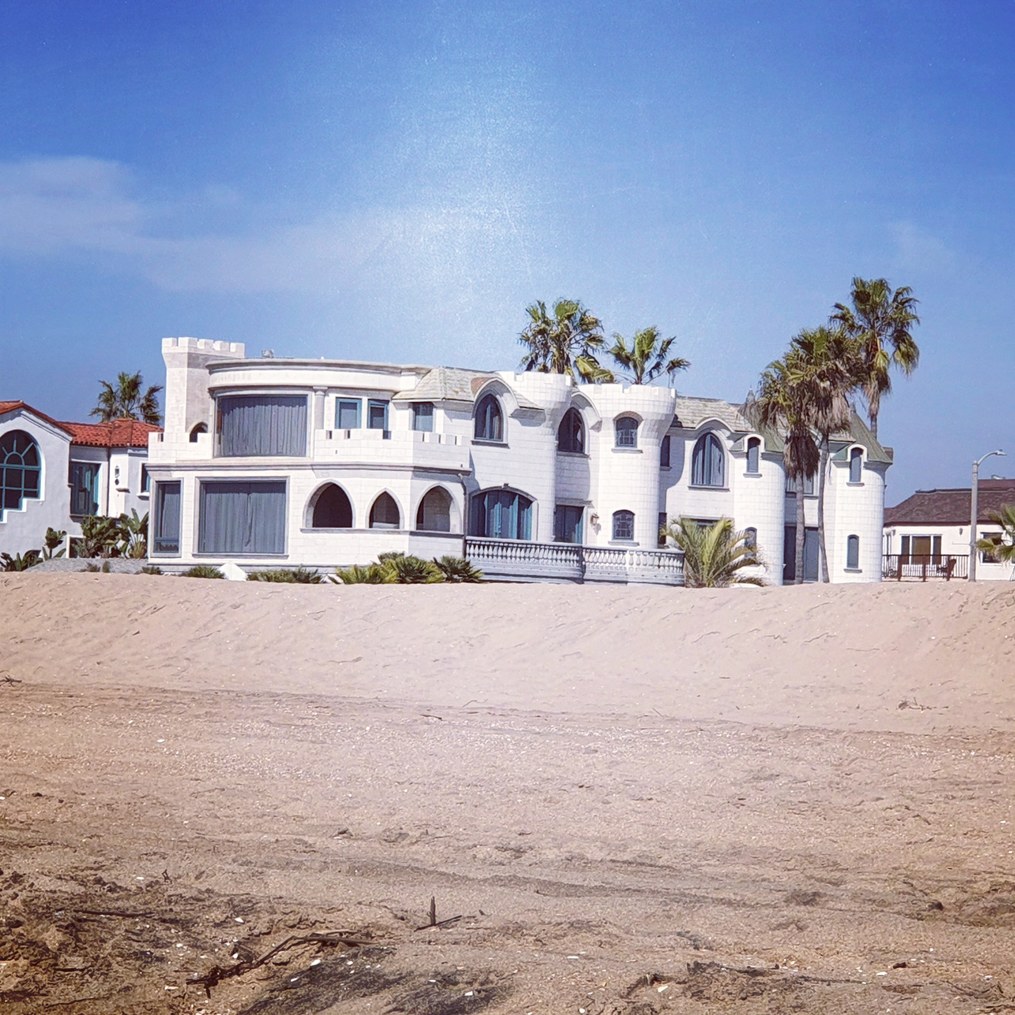 While vacationing in Sunset Beach, CA in February I took a picture of this house above. I knew it would turn into a story. I talk about how to capture ideas in a notebook while vacationing here. I spent time each day walking up and down the beach and smiled each time I saw this castle house. I liked the idea of it coming from Europe and making the intentional choice to move to California.

I also had the flash fiction story written by Pierre V! The Coffeeshop and the Man from Gone Lawn: A Journal of Literature. in mind. I love reading Gone Lawn as it has a lot of surrealist imaginative pieces. This story has a coffeeshop leave with a man to travel together.

There was also the Notre Dame Cathedral burning that happened last year and really shook the whole world. It was strange experiencing it while living in France and seeing the world react on social media about how connected they felt to the cathedral. I liked the idea of these old buildings seeing it as a wake up call to their possible lack of immortality. 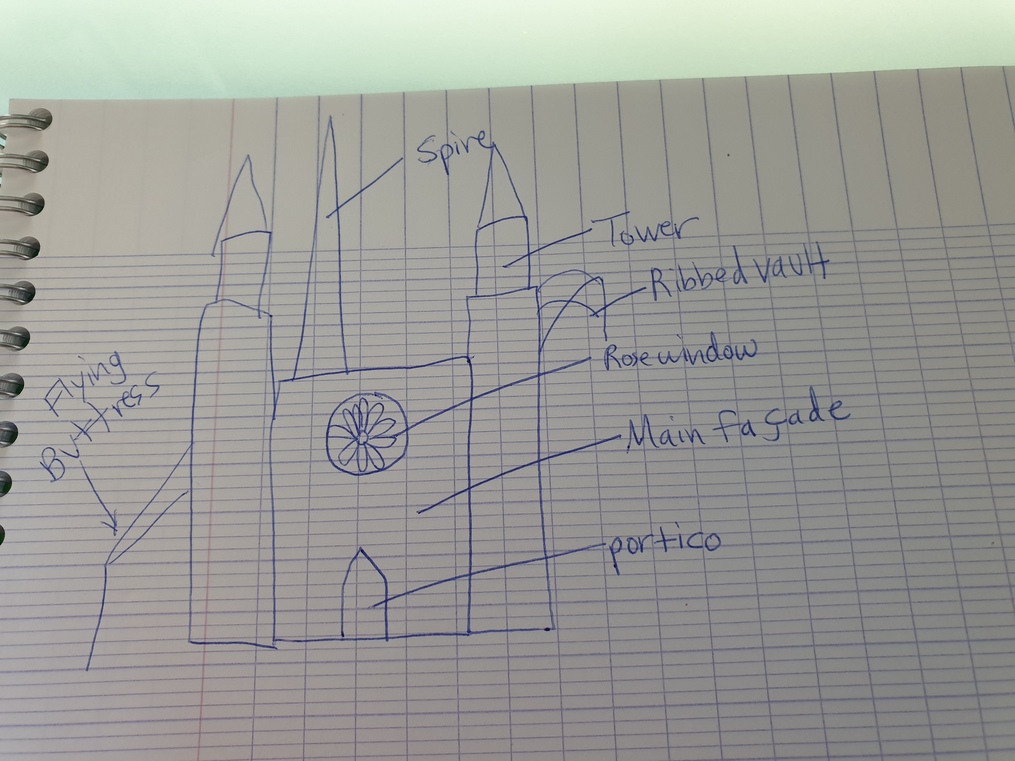 I love art history and it was a big part of my major in college. I remember studying all of the parts of cathedrals. I like to do little sketches of the things I will write about and try to make diagrams so I can include more specific nouns in my writing.

I also liked playing with the reverse move of something from France moving to California, since I moved from California to France. I notice the people in France having stars in their eyes when I mention coming from California, it is a place they want to visit and would love to live there. The same is true for Californians about France. I feel grateful that I have a leg in both paradises.

Are you interested in seeing the techniques I used to build my Instagram following by 2,000 followers in six months? If so, you can download my FREE Instagram Growth Checklist : click here . By downloading it you sign up for my email list. I send out a video author newsletter each month where I go to a different museum and give a summary of my writing activities.