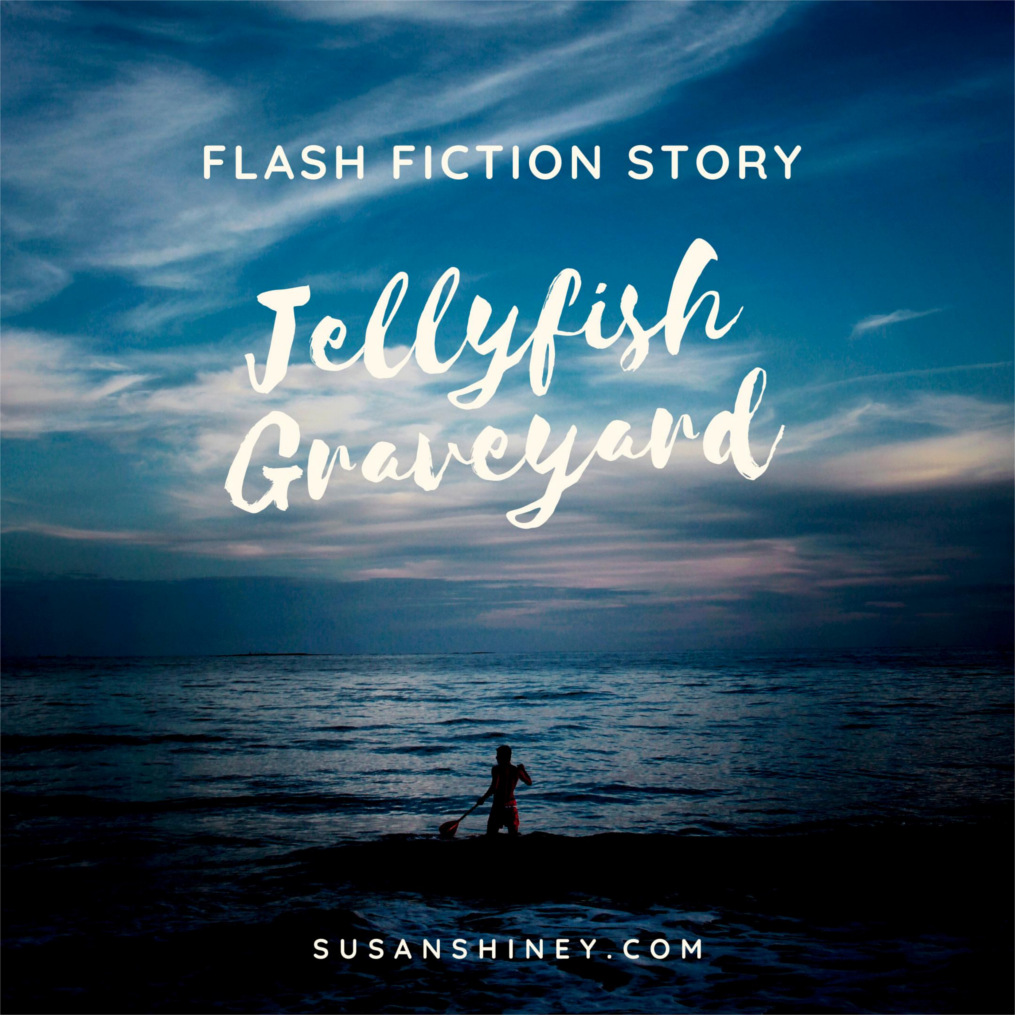 Agave Lillyhogan spent the first seventy-five years of her life following the rules of society and the last seventy-five making her own. Her mauve-tinted hands placed the home-made candle on her plate and she lit it singing and dancing to herself and her purple poodle, "Happy Birthday to me, one-fifty I see, oh Violet, it's been an eternity." She blew out the candle and said, "I have been telling everyone for years, those store bought candles with their chemicals seeping into those processed cancer-filled cakes, but do they listen, nope, I'm the crazy one."

Agave commenced with her weekly routine of crushing berries of all varieties in her bathtub. She was inspired by an I Love Lucy episode and decided to try it out for herself. This practice helped her longevity, not simply because of the antioxidants provided by the crushed cranberries, blueberries, grapes, and raspberries percolating into her skin, but by the simple joy of the ritual. She entered the bathtub in her sparkly black one-piece bathing suit, then wiggled and waddled her thin yet sturdy legs over the fruits going,"Wee, chuka, chuka, boom, boom."

Afterward, she and Violet would head to the beach in front of her apartment for their daily swim. Her bucket of berry nectar by her side, she would rub the berries into her hair to keep the lavender color maintained, she hated the look of her white hair but refused to use the toxic hair dyes available in the stores, this was the perfect solution.

One day, Violet started barking and crying, Agave asked ¨What is wrong, girl?" Violet turned her back to her and wagged her tale. Agave said, "Do you hate your white hair too?" Violet barked back. "Well, then we can match!" and she rubbed her poodle down with berries turning her coat a glorious magenta. A couple of times some beach-goers would murmur something about animal cruelty and Agave would respond, "It's organic and mind your own business." After their berry exfoliation they would shuffle into the sea to float while Agave identified animals in the clouds and Violet swam in circles around her, protecting her from the plankton or piranhas or whatever predators wanted to get at Agave in the sea.

Her great-great-great grandson, Payton, came to visit her and stared out the window of her balcony overlooking the ocean. He took in a deep breathe and said, "Grandma, you can't have plum hands, feet, hair, and a purple poodle."

"Well, why not, I am the happiest I've ever been?" Agave said while crushing some herbs she grew in her garden to make some tea.

He shook his head searching, then said, "It's embarrassing."

"Embarrassing? I stopped caring about what other people think fifty years ago. I don't need venomous nail polish for my finger or toe nails, they are always my favorite color now," she said and sat down at her coffee table that she made with sea shells she had collected.

"It is just not right, at your .... your age," Payton said and hunched over in his seat.

"Now you listen here, Payton, I was the one that told your father he should get you that electric guitar for your band, I supported you and your music. I love you, but if you don't accept me as I am, there's the door," she said and poured the hot water into her tea cup.

"I'm out,¨ he said and stomped out the door leaving his things behind.

Agave meant to return his suitcase, but when she opened it and saw all of those metal t-shirts with all of those colors and the soft cotton she glanced at Violet and said, "Little brat, I am keeping these for myself." She never listened to metal music a day in her life, but she wore those shirts proudly, they paired with her hair nicely.

The only plastic Agave had in her possession were the poop bags she used for her purple poodle when they took their walks together on the beach. She always kept them stuffed in all of her pants pockets so she didn't need to think about it. Adorned in an Iron Maiden t-shirt and Violet wearing her spiked color they would make quite the spectacle everywhere they went. Occasionally, new tenants would move in and the children would run to her with audible "ohhhs and ahhhs". Agave played it up and would do a little fox-trot. The children would clap until their parents would catch-up and pull them away and tell them not to stare. Agave would shrug and head to the beach.

On the day of her one hundred and fiftieth birthday while strolling on the sand she was confronted by a dead jellyfish on the beach. It was translucent on its outer layer but had a brilliant blue emanating from its stomach pouch. She told Violet not to get too close and kept walking, where she found another, and another. Agave scanned the shoreline and saw blue jellyfish speckled everywhere. She put her hand on her chest and said to her poodle, "Poor things, they let the world get to them, they kept stinging those around them just for being themselves, and took in all the blueness of the ocean. The back and forth chaos of the tides, they gave up.¨ She started tearing up. "We can't just leave them here, creatures like this, they deserve more."

She searched for one of the poop bags she had in her pocket and scooped the jellyfish up and placed it in the sac with care. She collected all of the jellyfish she could handle in her plastic sacs. When a woman like Agave decides to collect dead jellyfish on the beach, all the people in her vicinity let her be. One beachcomber almost said something, but he saw the purple on her hands and mistook them for gloves and thought against it.

As she tottered up the stairs with her twenty dead jellyfish the creaking was a symphony in itself, not from the wood, but from Agave's bones. A teenage boy was smoking a cigarette near a window watching her struggle, "Hey, what do you got in there? Those stink.¨

Agave Lillyhogan stopped, elbowed away some sweat on her forehead, looked at the ruffian dead in his eyes and said, "You stink."

He was stunned for a moment, laughed and smelled his armpits, "Really?"

Without missing a beat, Agave said, "I don't know, I lost my sense of smell forty years ago. And don't worry about me, sonny, I can carry these bags myself. Can you believe the youth these days, Violet?"

The ruffian looked concerned, "Who are you talking to?"

"My..."and as Agave started to speak, Violet faded away. She steadied herself on the wall as the despair pumped through her. "I forget sometimes that my dog died. But, don't worry, I will forget that I forgot and she will come back again."

"You alright, lady, should I call someone?" he asked while pulling out the smartphone from his pants.

"Call your grandmother and tell her you love her," Agave said and made it back to her apartment.

She filled her lilac-tinted bathtub with cold water and poured in the salt from the large bag she had sitting nearby. She took the jellyfish carcasses out one by one and said ¨zippee, zippee" each time she was stung. With all of the aches and pains she had, the jellyfish kisses were a form of acupuncture awakening her long dormant nerves.

The next morning as she drank her coffee on the balcony overlooking the seashore, she released a few tears when she saw more blue jellyfish speckling the coast. She nodded to herself and said, "It's just not right."

She came back from her second jellyfish gathering expedition out of breath and a bit dizzy. Her bathtub was already full so she took out every pot, pan, bucket, and Tupperware she had in her apartment, filled them with water and salt and submerged the jellyfish inside murmuring "zippee,zippee" to herself.

"Agave, Agave, wake up," she heard from dozens of tiny high-pitched voices. Agave blinked her eyes a couple of times and in the dark the fluorescent blue jellyfish flowed and fluttered in the air around her bed.

"Hello, hello, my friends, welcome, welcome," she said to her aquatic visitors.

They continued to float and hover around her, their tentacles undulating in the air, the moon came out from behind the clouds causing their epidermis to sparkle. Their voices said, "We are leaving Agave, want to come swimming with us.¨

Agave nodded understanding what had happened, she put her hand out and massaged a near-by jellyfish tentacle. "It was a natural toxin that got me, at least." She sat up and saw her dead body with blisters over her arms and hands and a huge grin on her face. She knelt down and gave herself a kiss on her forehead. Violet appeared with her own jellyfish tentacles flowing around her. "Heya, ready to go swimming, girl!" Agave had a couple of her own tentacles emanate from her as she started to float.

They all swam through her apartment window together, over the sand, over the ocean, toward the moon.

Story behind the story:

I went on vacation in Dunkirk, France in October 2019. I went on daily walks on the beach and kept seeing dead jellyfish everywhere. I had the title Jellyfish Graveyard right away, I loved the sound of it and planned to build a story around it. I wanted to capture how heart-breaking it was to see such beautiful creatures dead. 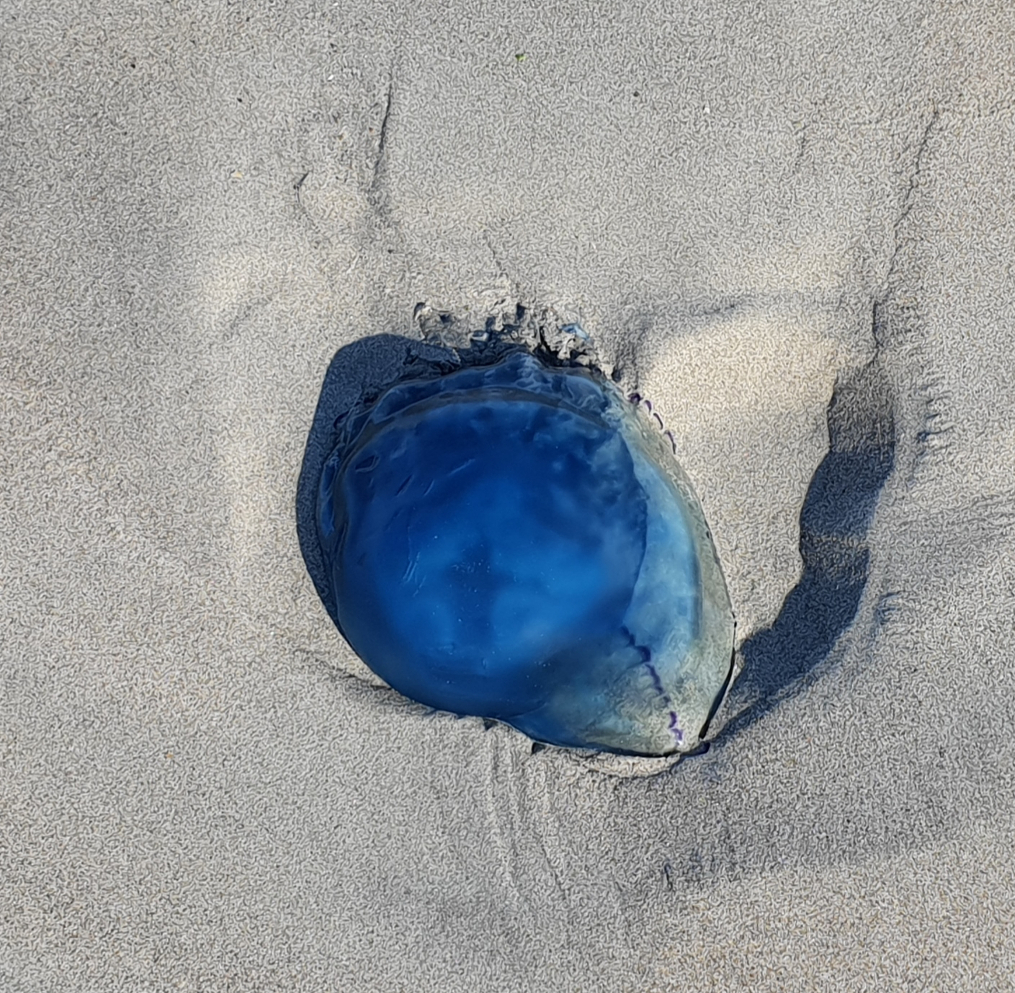 I came home and wrote some additional ideas for a story here: 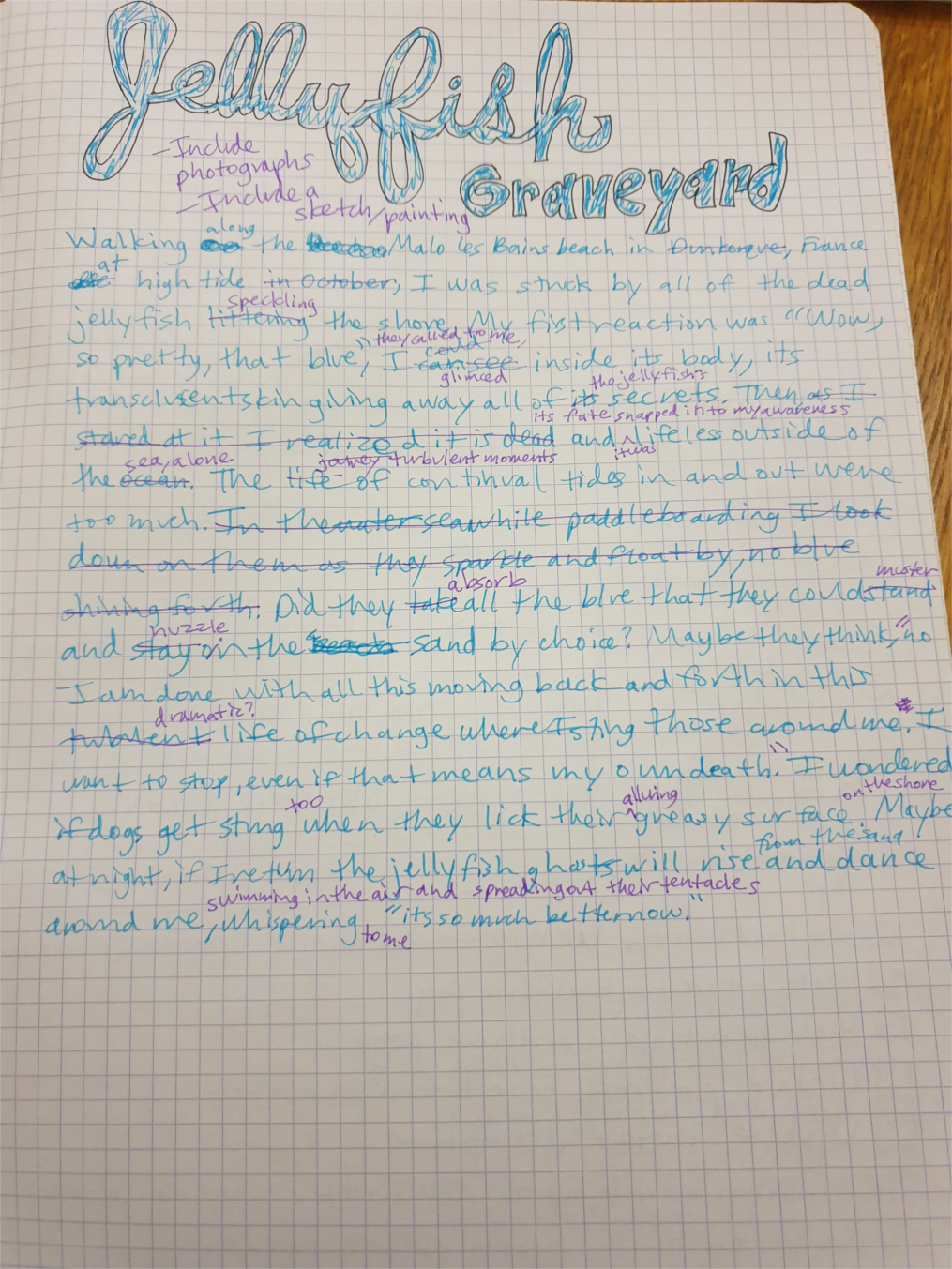 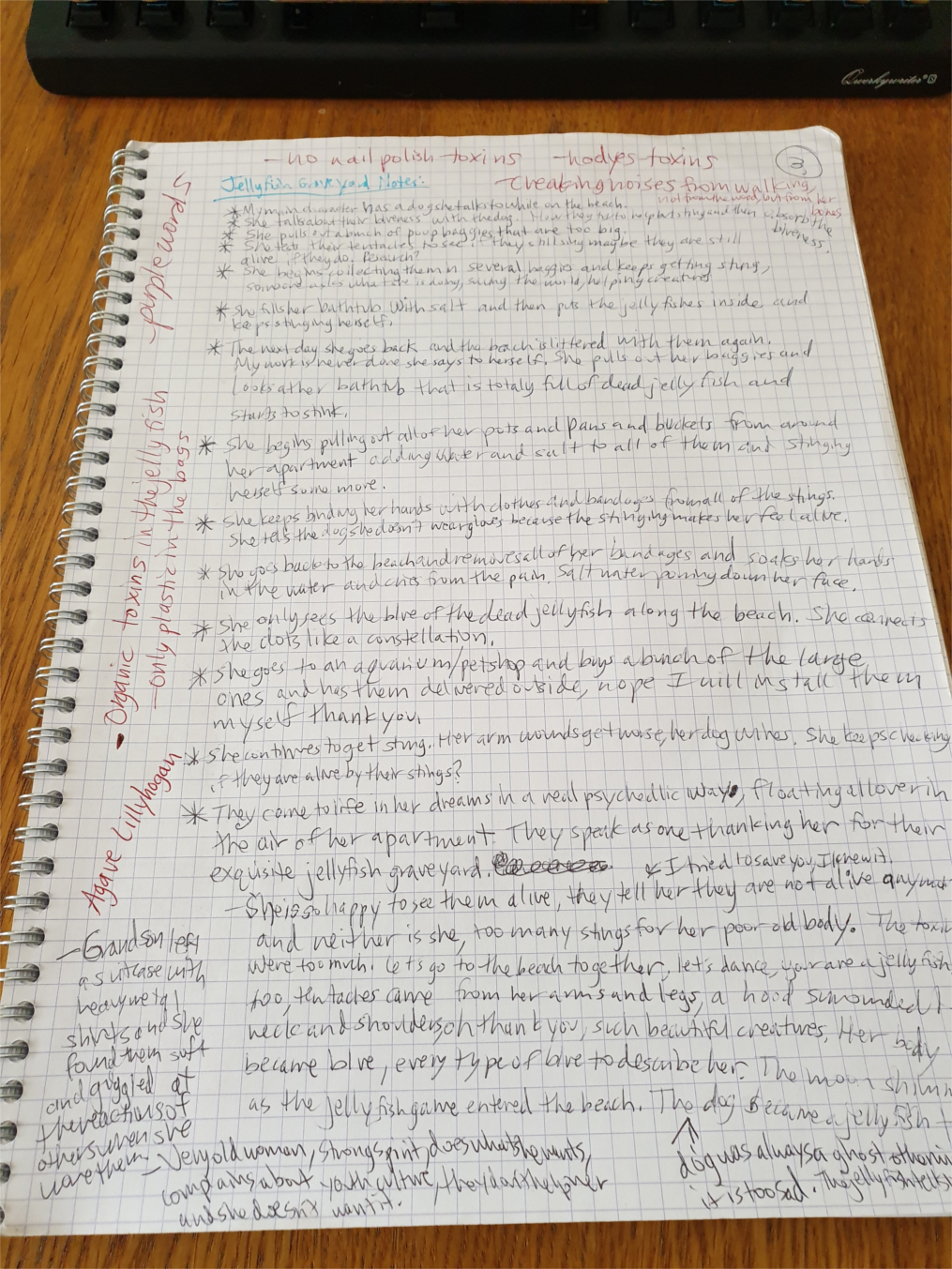 Slowly, the pattern of toxins and chemicals came up and I liked the idea of the jellyfish stings contrasting with other things that Agave avoided which probably led to her having such a long life. It tied her eccentricities with the jellyfish. 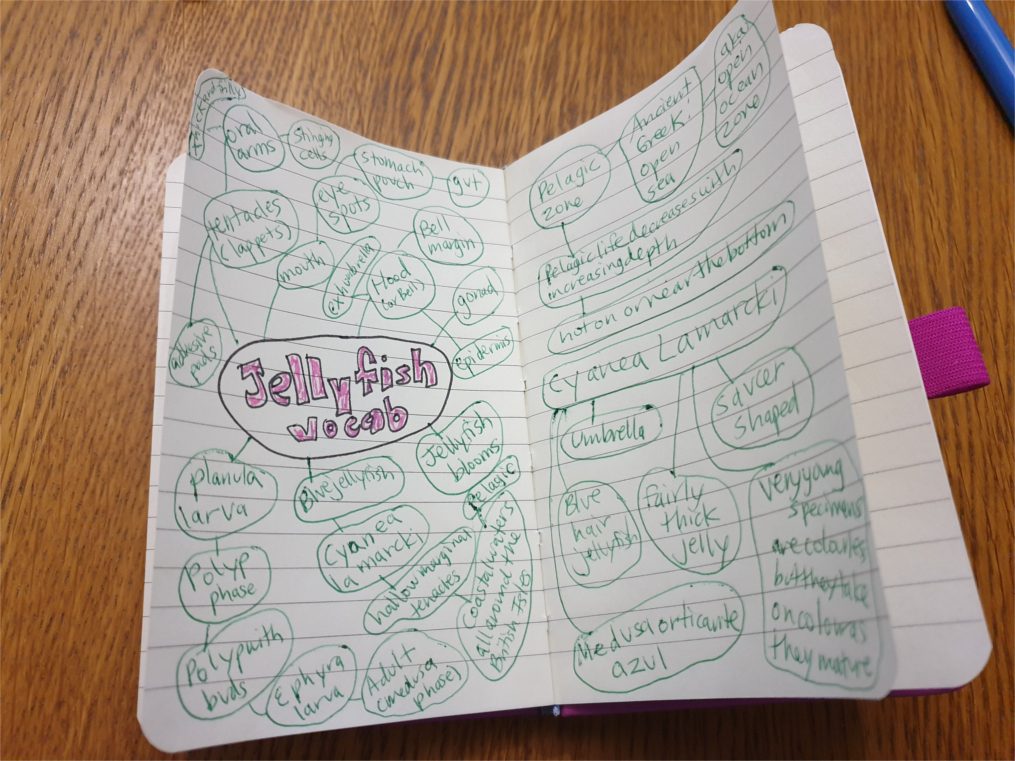 I did some research and was able to identify the type of jellyfish. It is a blue jellyfish with a scientific name of Cyanea Lamarci after the French naturalist Lamarck.

If you are interested in reading another of my flash fiction stories and my discussion of my revision process you can go here: https://susanshiney.com/an-origin-myth-of-magical-mist-or-whatever/

If you like this flash fiction story and want to follow my journey writing a novel that has a similar vibe to this story, you can sign up for my newsletter here: https://mailchi.mp/1aa1d695bea0/susanshineysnewsletter

What is your process for writing a story? Do you like it when I talk about my inspirations or is it better to let the story speak for itself?