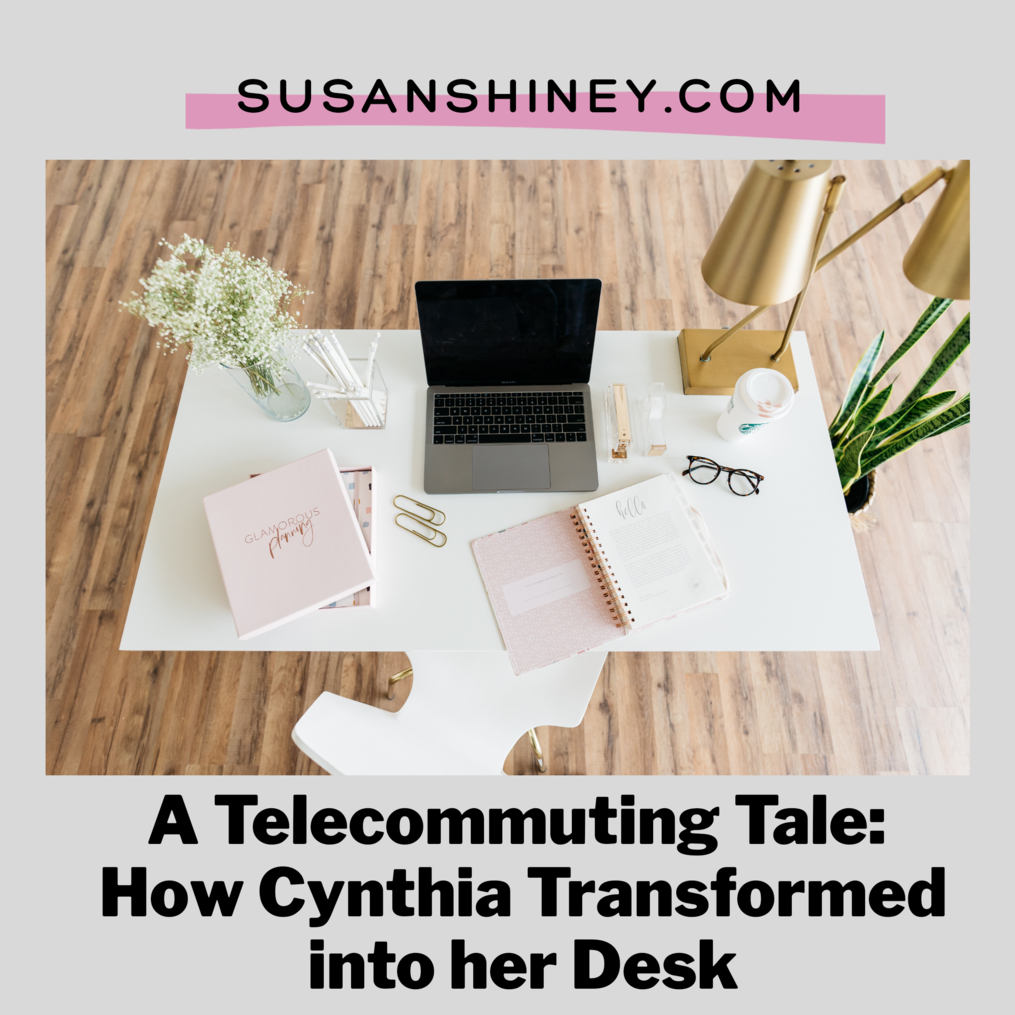 Cynthia was happy to work from home... at first. So much freetime without having to commute back and forth to her job everyday. Lunches in the comfort of her recliner. Sleeping in to the last possible moment. Wearing sweats with a blouse for possible video conferencing meetings.

The first three weeks were a breeze. She stretched three times a day, did self-massage, and took coffee breaks with her co-workers online. She had never worked from home before. Sixty to zero. The rush of life followed by a slowing down that let her find her rhythm again, take stock of her life, breath.

Five weeks in, they were realizing it would be her new reality for the forseeable future. As the world halted its activities she felt the lag on her motivation and the fearful thoughts whispering in her ear of what this new world might mean. What was in the air particles blowing in the wind in her front yard? Several of her friends were out of work so she felt grateful to be able to continue making her salary by telecommuting, also guilty.

Fear, uncertainty, and guilt built up in her legs. She sat and sat and sat for hours on end staring at her screen. She didn't have the umph for stretching or exercising anymore and day by day they began to harden. She thought something was wrong when she woke one morning to metal posts connecting to her hip joints replacing her legs. Her mother said it was just her anxiety.

The metal legs were so svelt. She looked great in jeans and at least she stopped wearing her bulky sweats. The daily deliveries of packages at her door were stressing her out now. She hated touching them with her plastic gloves and disinfecting everything. She washed her hands fifty times a day at least with the strongest disinfectant money could buy.

One morning, as she scrubbed both her arms all the way to her shoulders the sudsy appendages felt very cold. She rinsed off her right arm and all that was left was a metal post. She gasped and then rinsed her other arm only to find the same thing happened to this one too. She voice activated her phone to call her mother to give her the update to her health and her mother asked her if she had a temperature or any dry cough. Well, no she didn't have anything like that but most definitely four metal posts jutting from her body. Her mother said, "You don't want to fill up the doctor's offices with any kind of non-emergency, it is all in your head, everyone is on an emotional roller coaster right now, watch the Tiger King, it is a lovely documentary, it will take your mind off things."

So, Cynthia continued to work and got quite good at typing with her tongue. Well, she couldn't use her metal posts they would break her keyboard after all and they were too thick for that sort of thing anyway. In the evenings she slowly let the news back into her life after avoiding it for weeks. Coming out of lockdown was becoming so political. Wear a mask or don't wear a mask. Her brother thought the whole thing was a government conspiracy and they would win if he practiced social distancing. Her sister said people like her brother is what is making this whole country fall a part. Neither one of them wanted to talk about her newly acquired metal appendages. Cynthia didn't know what her opinion was, she was just scared, scared of it all.

Political talk tended to manifest in her back. She hung up with her sister and sneezed, then went rigid. Cynthia looked in her hallway mirror and saw that her back had now become a white formica table-top. "This is just getting out of hand now," she said to herself.

However, she didn't have any time to dwell on it because she had to go to an online meeting. She barely fit through her office door. She couldn't sit down anymore and was too embarrassed to be looked at so she told the rest of the participants that her webcam wasn't working. When she complained about her aches and pains, one of her co-workers said she felt like she was becoming a bamboo plant before she got back into doing her daily ergonomic stretches. Cynthia found the human resources email describing the different activites that could make telecommuting more healthy.

Cynthia bent forward to touch the place where her toes once were. Crick. Her body locked in place and her head was absorbed into the desk. She couldn't see anymore but she could sense things. For example, she could sense that she was an IKEA desk. She hadn't put a lot of thought into it, but she did suppose that if she were ever to become a desk it would be a one of the Pier Imports sort, you know what I mean.

She wouldn't have to worry about what outfit to wear, but could be accessorized by flowers in vases, pink notebooks, and all kinds of lovely things like that. If she went through a phase coffee rings could be her tattoos unless she grew tired of them and then they could be wiped away.

No more online meetings, no more politics, no more lungs that could be infected, just nuts and bolts that would need to be loosened whenever she let herself get too tight. No more pressure to ever go outside again because she was a desk now and desks most obviously stayed indoors.

How is working from home going for you? 🙂 Please leave a comment below.