Aviation: A Gateway to Escape and Adventure by Raphael Relat 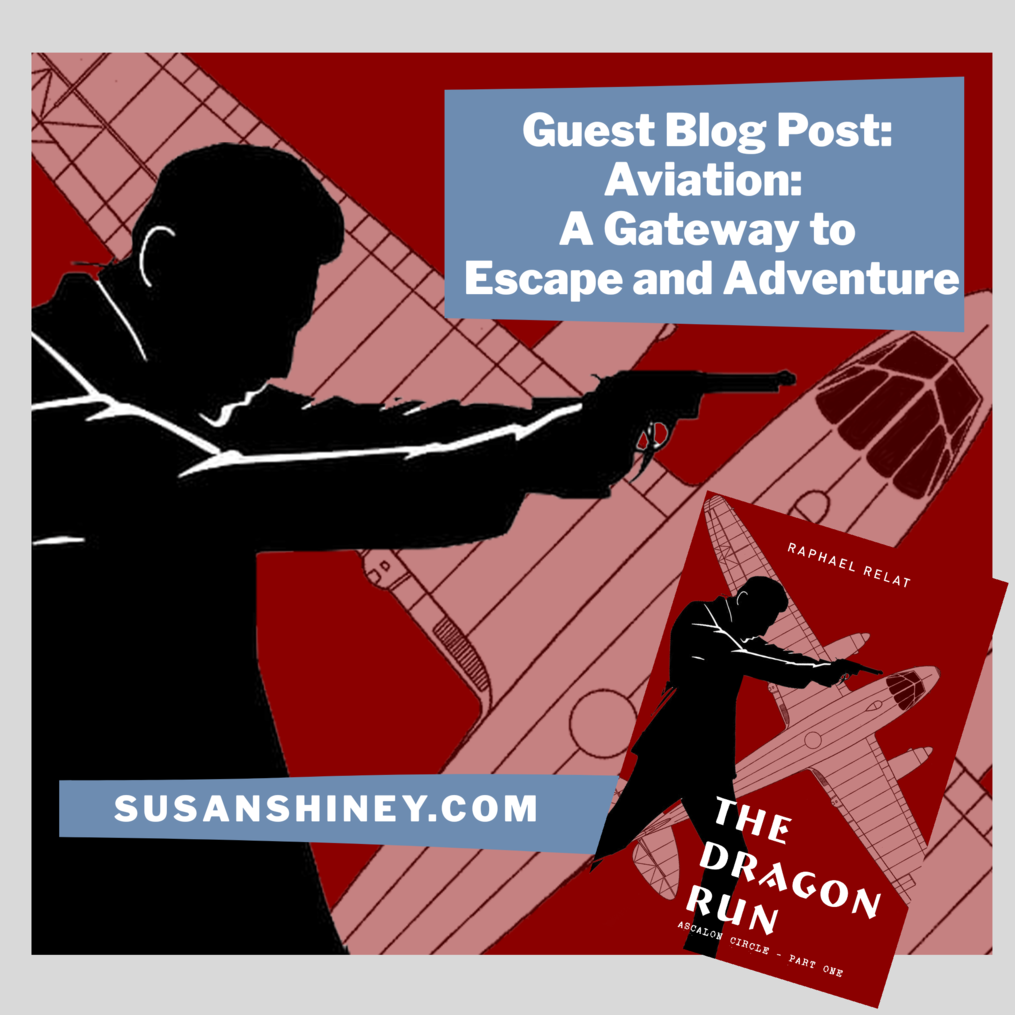 This is the thing that stories and planes have in common: They allow you to escape to faraway lands, and live exciting adventures... I am not talking about modern aviation however, although mass travel did, in the words of Harrison Ford, effectively give us portals that can teleport us to every corner of the globe in a matter of hours. No, I am looking back to the early days, to when aviation was in its silver age, an age of pioneers, an age where planes were still organic machines, made of wood, fabric... and a bit of magic. Writers like Kessel and Saint Exupéry told the tales of these intrepid pilots who opened routes where no one had flown before, crossing perilous oceans and mountain ranges, challenging darkness by flying at night. 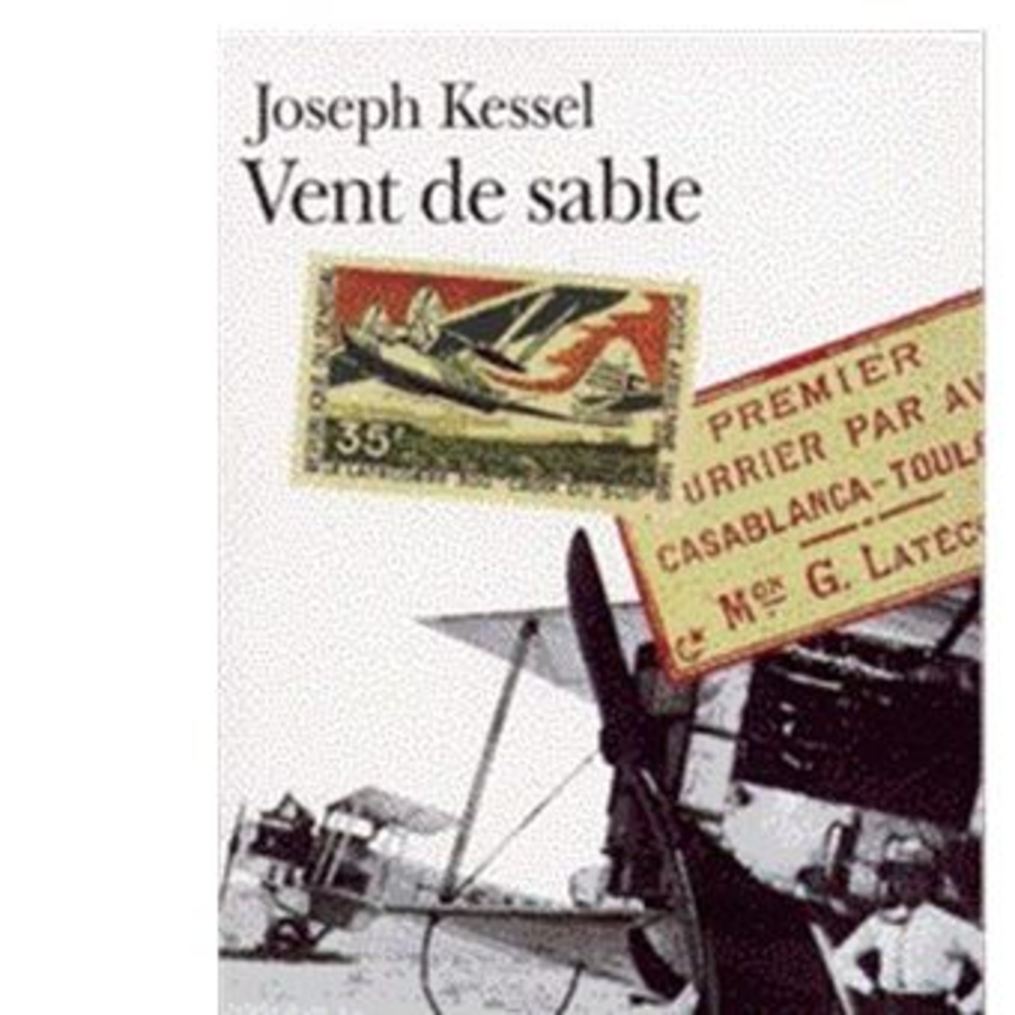 More than any other in recent history, this era seemed tailor-made for pulp and adventure fiction.

Take “High Road to China”, for example. In this Tom Selleck vehicle, wealthy heiress Evie (Bess Armstrong) hires hard-drinking pilot O’Malley (Selleck) and his two biplanes to fly from Egypt to China in a quest to prove her missing father is still alive. We follow the two planes across Turkey, Afghanistan and up to the Himalayas, as they cross hostile plains and snowy peaks, with a soaring score by none other than John Barry. 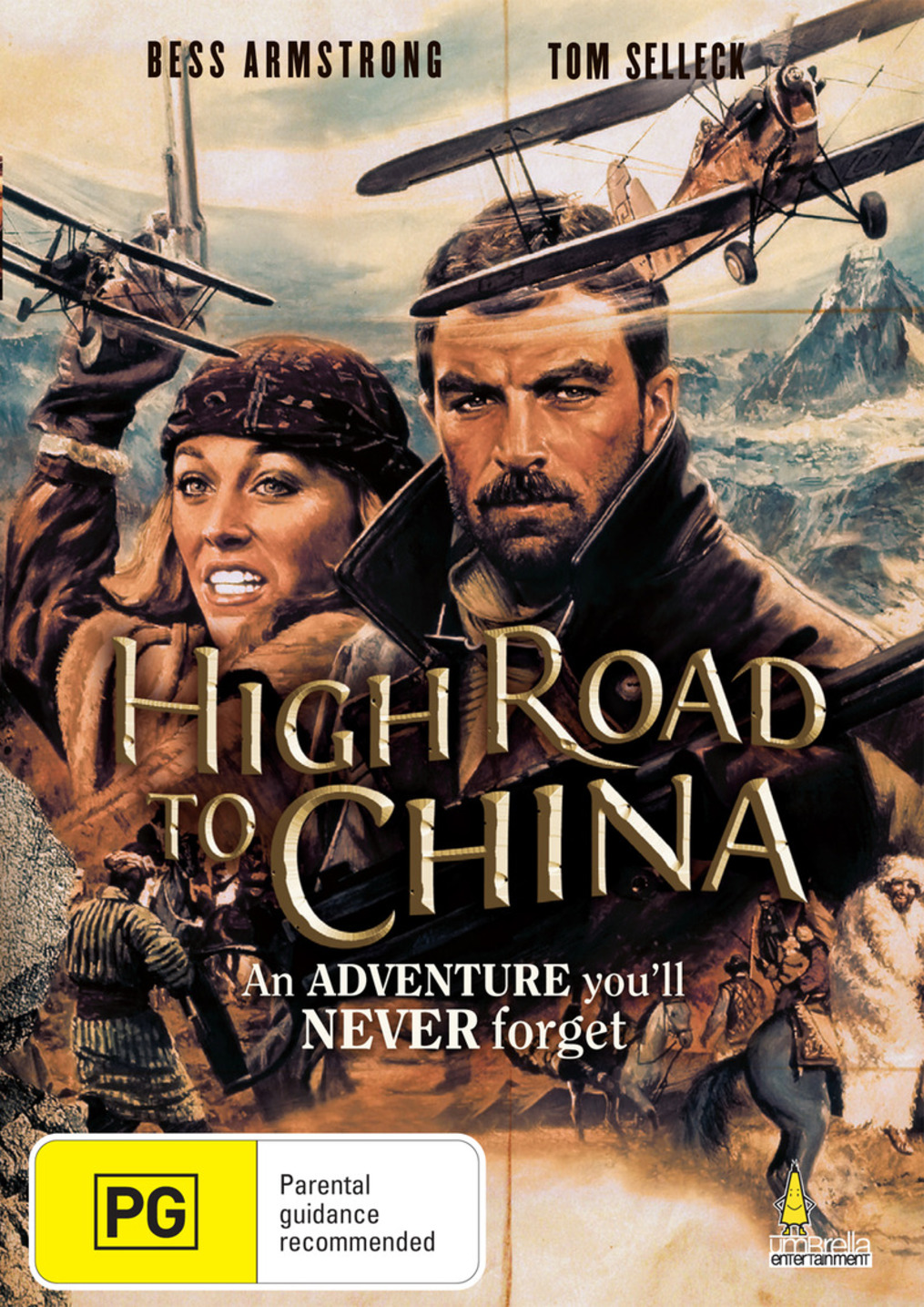 Coming out in 1983, “High Road to China” was riding the coattails of Indiana Jones, of course, and arguably suffered from the comparison. It does not feel as polished and parts of it have not aged well; the same could be said of Indy, to tell the truth. But what it does very well is capture the extraordinary power of aviation: the capacity to fly, of course, but to fly far and explore, to travel freely to great distances with just a bit of gas and a flat prairie to land on. Or just a body of water...

The age of the flying-boat

Infrastructure was scarce, so the flying boat was king in these days. Pan Am had its legendary “Clippers”, Imperial Airways its network of Short Empires. In France, manufacturers like Latécoère and Breguet built giant machines to transport mail and passengers from Europe to the Americas. 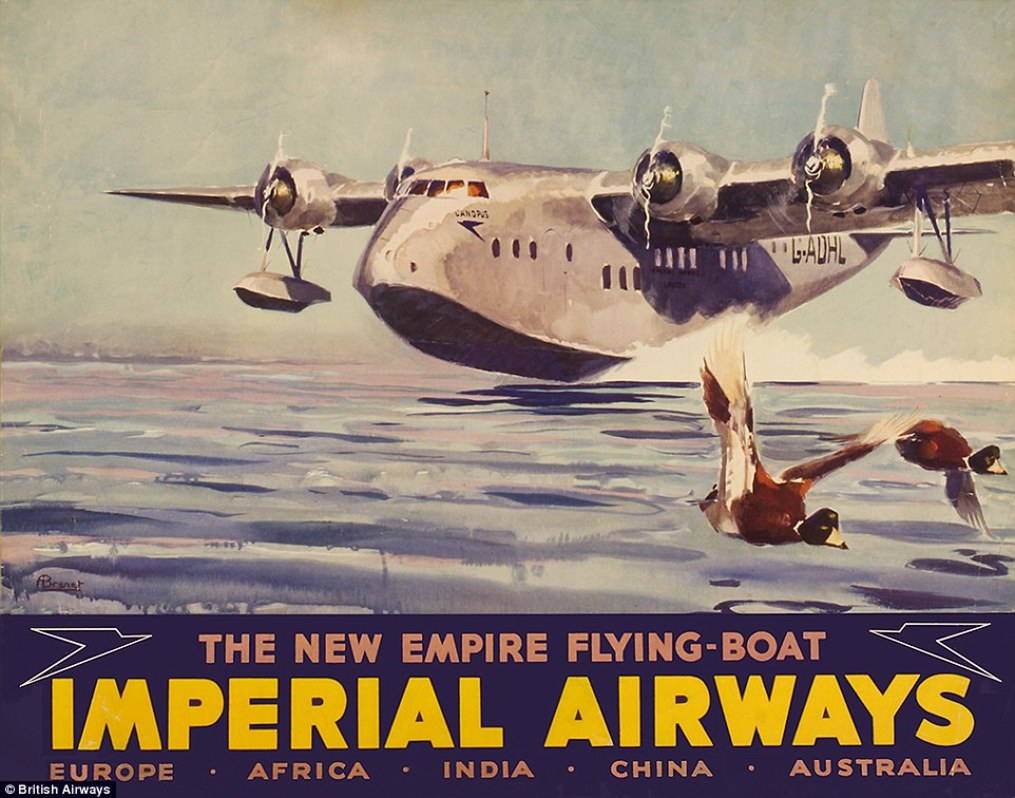 In Africa, Martin and Osa Johnson took to the air to film their travels, one of the first travel documentaries ever made. Today, where National Geographic-style features abound, with their high-definition, and drone footage, and HDR, with our LED TVs and digital sound, it’s hard to imagine the impact that these grainy images of black and white, showing giraffes and zebras run freely across the savanna, had on the public. Suddenly the power of film and the power of aviation combined, to take viewers to places they likely would never visit in their lifetime.

The Johnsons used amphibious flying boats to make their trip, taking advantage of land, lakes and rivers alike to land and make camp. The capabilities of the Sikorsky S.38 were such that it also found a niche success with a very different crowd: the super-wealthy. Howard Hughes, among others, acquired one and used it frequently as a flying yacht... 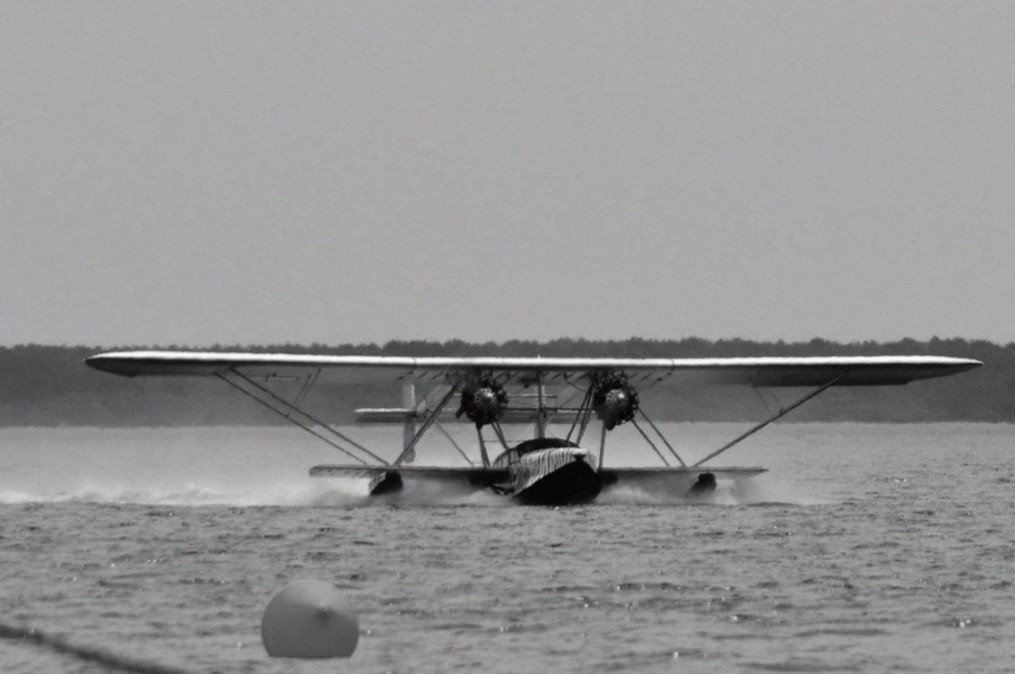 The Tales of the Gold Monkey

A lesser-known Bellisario production, “Tales of the Gold Monkey” is a TV series that came out thanks to the success of the first Indiana Jones movie. I said “thanks to” this time, because the project predated Indy by many years and spent ages in development hell, for fear it would not be profitable. When “Raiders of the Lost Ark” proved otherwise, the series was greenlit, and viewers finally had a chance to follow the adventures of ex-Flying Tiger Jake Cutter, his one-eyed dog Jack... and his red and white Grumman G-21 Goose flying-boat. Set in 1938, the series, on paper, had everything: intrigue and espionage, undercover Nazis and femme fatales, exotic south pacific islands, hidden treasures... all with a pulpy touch and humor to make it suitable for prime-time TV. 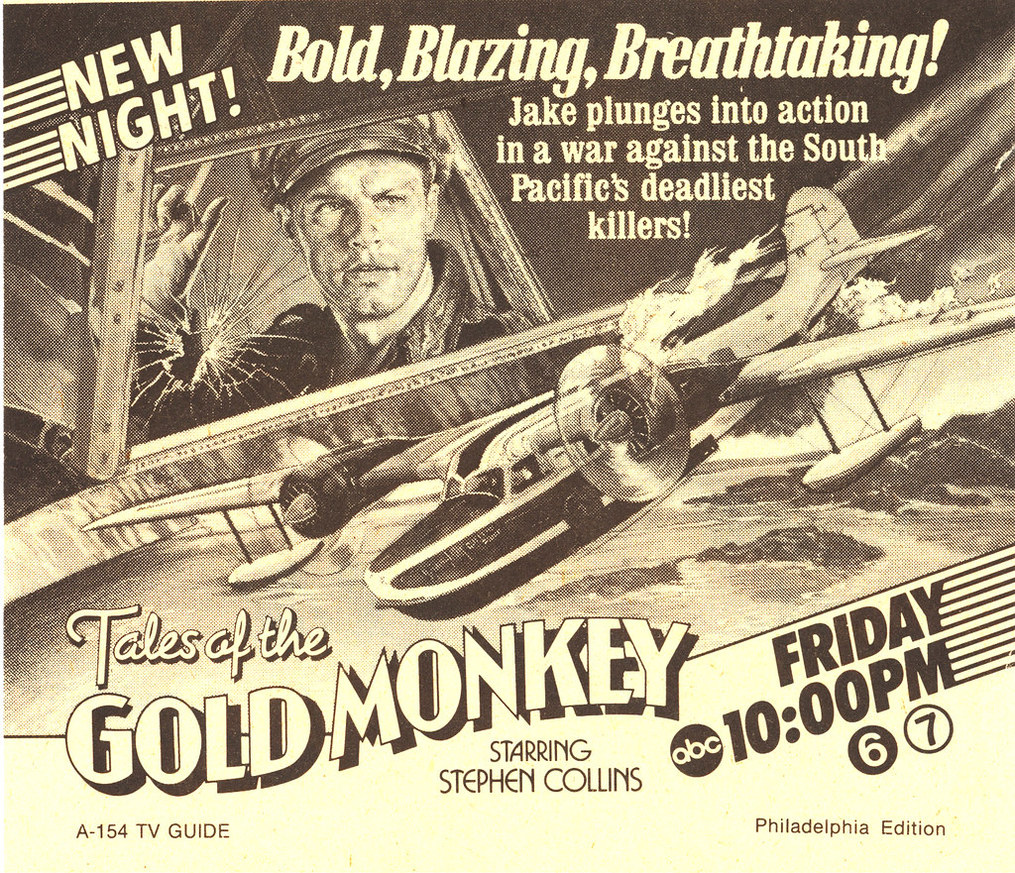 “Tales of the Gold Monkey” advert

Like “High Road to China”, it is not that well known. The series only lasted a year before it was taken off the air, and never really made an impact. But both are beloved classics for aviation enthusiasts and have inspired other works. “Gold Monkey”, for example, was Disney’s primary reference when they created “TaleSpin” in 1990. My very own Yann Vatel, the protagonist of “The Dragon Run”, has a lot in common with Jake Cutter and Bob Morane.

Wait, who is Bob Morane?

If Jake Cutter is the flying-boat pilot, Bob Morane is the spy. Invented by Henri Verne in the 50s, he’s a sort of French freelance James Bond, an ex-RAF pilot roaming the world with his friends, thwarting coups, fighting pirates, liberating the young damsel in distress... the classic, chaste knight in shining armor, in other words!

Like Bond’s early stories, Morane’s adventures can be cringy sometimes to modern readers. Once par for the course for 1960s audiences, the condescending sexism and the casual racism (mainly in how certain antagonists are depicted) can be a tough pill to swallow in 2020. Yet, it represents this archetypal figure of the pilot adventurer, at home in any country, always ready to fight and right the wrongs of our times...

Yann Vatel’s adventures are my attempt to capture this magic again and bring it to today’s public. Nowadays, only air show aficionados can really experience what it was like to see and fly in the flying machines of the 1930s and 1940s, and if the latest Indiana Jones is any indication, adventure stories have lost their luster these past few years... I wanted to change this. I wanted of course to write the kind of book I’d want to read myself, but I also hope to bring back to life this feeling of adventure, to bring the wonder and magic of flight to others, in a more inclusive and sensitive manner more fit for modern sensibilities.

Each book in the planned “Ascalon Circle” series is titled after a plane that features heavily in the story, and it is a special privilege to be able to say I’ve flown in the first two: the DH.89 Dragon Rapide of “The Dragon Run”, one of the most beautiful biplanes ever built, and the PBY Catalina of “The Kerguelen Cat”, a legendary flying-boat with more lives than the proverbial feline! I am forever grateful to the friends who made it possible, and to the pilots and crews who keep these birds flying and allow us to live such experiences. More than mere machines, these planes truly are characters in their own right, the indefatigable Rocinantes of our Don Quixotes, carrying them faithfully on their quest. The roar of radial engines is long gone from our airfields, but their spirit lives on as long as we keep them in our dreams, echoing with the words of Leonardo Da Vinci:

“Once you have tasted flight, you will forever walk the earth with your eyes turned skyward. For there you have been, and there you will always long to return.” 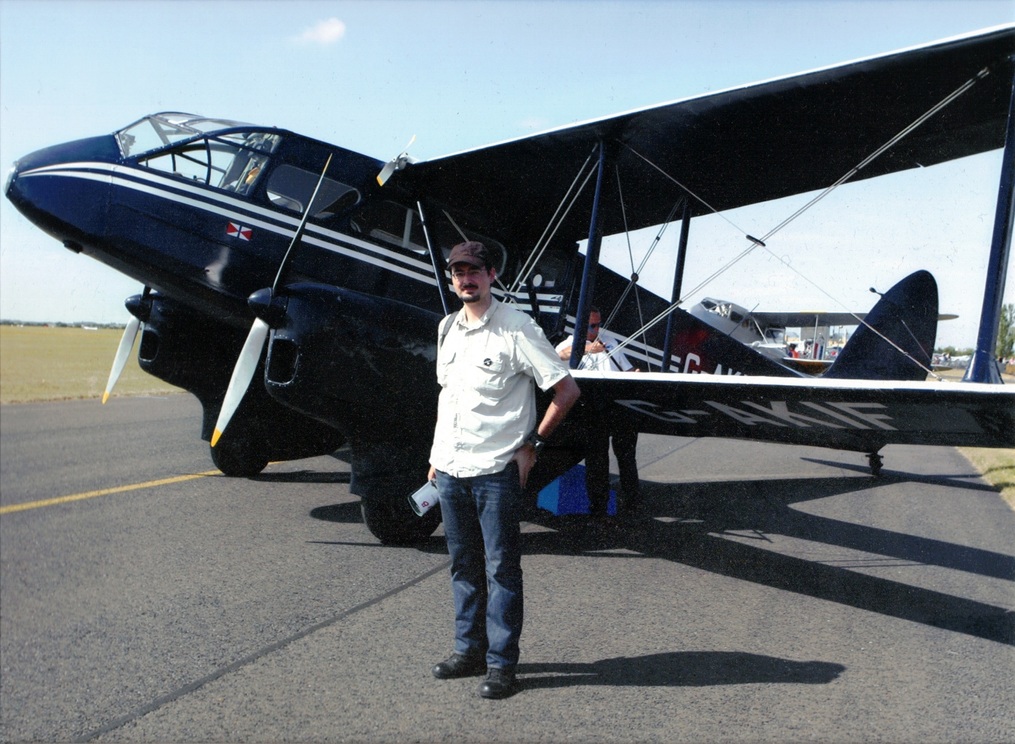 Yours truly and the Dragon Rapide at Duxford, 2015

“The Dragon Run”, Part 1 of “The Ascalon Circle”, comes out on November 1st on Amazon and is open for pre-orders.

Raphaël Relat is a historical fiction author and photographer. Born in France, he has been living in Barcelona, Spain since 2006.

His stories draw inspiration from his passions for languages, travel, and vintage aviation. Calling back to the golden age of pulp spy/adventure stories, they often feature distant locales and exotic machines such as the PBY Catalina flying boat.

He also writes science fiction and poetry. When he is not writing, he enjoys classic jazz and sailing the sunny Costa Brava.