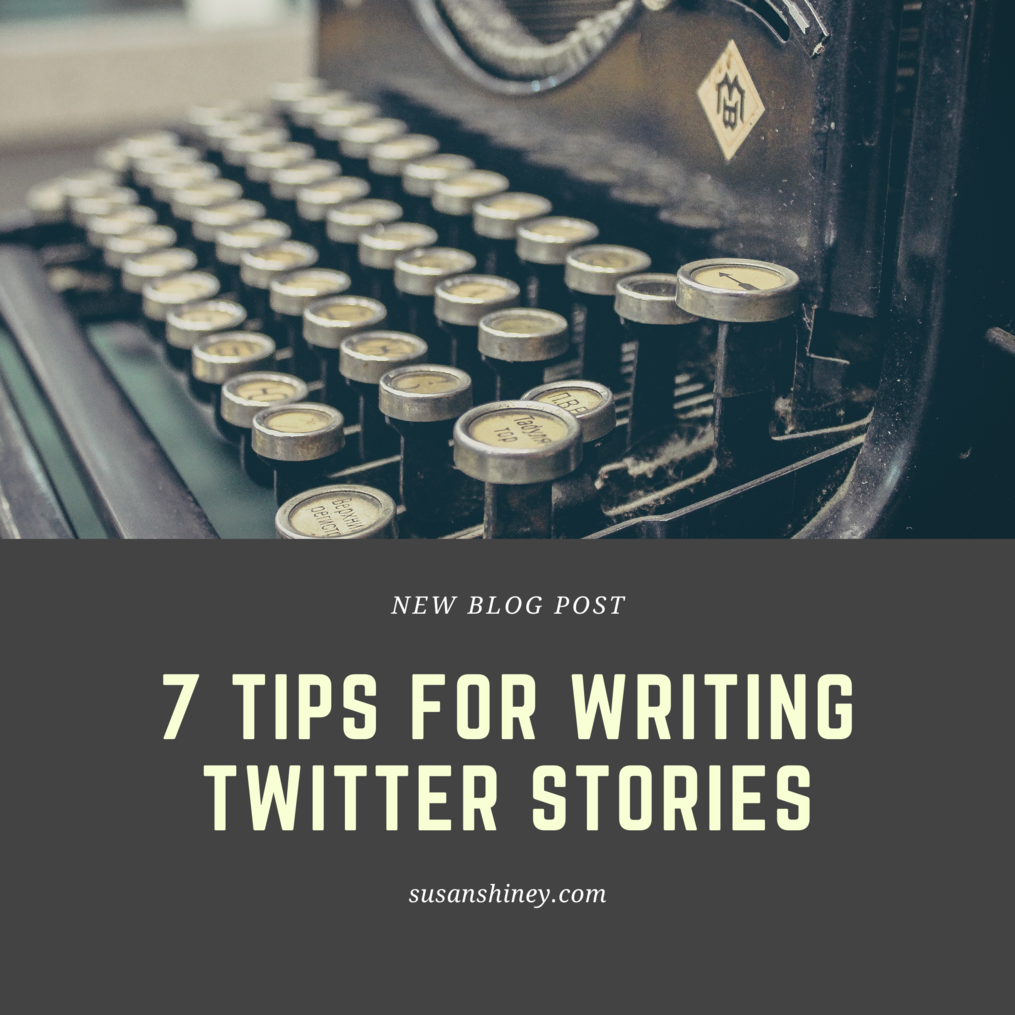 I used to be like most people and thought the story form classifications were either short stories or novels. There is so much more! Novels usually have a minimum of 50,000 words. Short stories have anywhere from 1,000 to 7,500 words. Novellas fit the space between short stories and novels and apparently they are getting more popular in the e-book world.

I have a growing interest in the stories that are below the short story designation. Flash Fiction can be anywhere between 100 and 1,500 words. There are several online literary magazines dedicated to this type of fiction. The 100 or 101 word story movement even has a space for itself too. Below 100 words can be designated as micro-fiction. And an even more specific type of story that we are covering in today's post, a story in a tweet of 280 characters. Twitter doubled its character maximum in 2017 from 140 characters and this is a much better character count for stories and can usually encompass about 55 words.

So, here are seven tips for writing Twitter stories:

Twitter stories, stories in a tweet, or twitter fiction can all be found on the platform. A good place to start is by searching #vss for very short stories and also #vss365 which gives a daily word prompt where several writers use the same word to base their stories on. You can go to http://vss365today.com and sign up for their newsletter to get the word of the day emailed to you. It is interesting to read all of the different ways writers use the same word prompt. There is a nice community of writers that connect over this kind of microfiction as well. You can also search #sffiction for the contest that Serious Flash Fiction runs each year for around a month and chooses the best twitter fiction to publish in their yearly Serious Flash Fiction anthology https://seriousflashfiction.weebly.com/.

2.Keep a running list of concepts in your writer's notebook.

This tip works for all kinds of writing, but if you have a large list of moments to brainstorm you can categorize your ideas. Some moments of inspiration can span a whole novel, some are small moments for a tweet and anywhere in between. An idea for twitter fiction can also turn into a bigger story, as well. Putting a concept into a tweet doesn't mean it has to be lost forever. Short films become feature films, as can short stories blossom into epics. Story geeks like me love to trace this progression in their favorite authors. Why not? Write down those small moments that come to mind that you think might not mean anything, these kinds of daydreams fit well into twitter stories. For example, I had an idea about a broken angel wing that I turned into a story in a tweet. Also, the idea of a skipping rock turning into a bird, is another random image that I shaped a small story around. It fuels my creativity and I believe in the idea that the more ideas you put out into the universe the more that come to you.

3.Free-write a concept not thinking about length and underline parts that could be cut as you brainstorm.

I free-write around what ever moment or image I get inspired by in my writer's notebook or emails I send to myself. I start off by not even thinking about word count or how many characters I am using because there is no need for censoring in the early parts of the process. Another perk of twitter stories is to figure out your drafting process in a small way, this is the same approach I take to writing novels. One way I differ with a story in a tweet is by underlining parts that could probably be cut out as I brainstorm. Just to help move the next step along. I also underline words I know I need to think more about later, but not before I get my initial ideas out.

4.Try to find an end point in your brainstorm, the beginning and middle usually come easily.

I still don't think about length until I find the ending. That is the hardest part, what final piece of dialogue or image could end this small moment in a poignant way? I will usually write out about three of four possible last lines or I brainstorm in several sentences what the ending could be and then I try to figure out how to show it in a concise way. Sometimes the ending will help direct you to start it in a different way to make a small change either in who the character is or who the reader thinks they are. 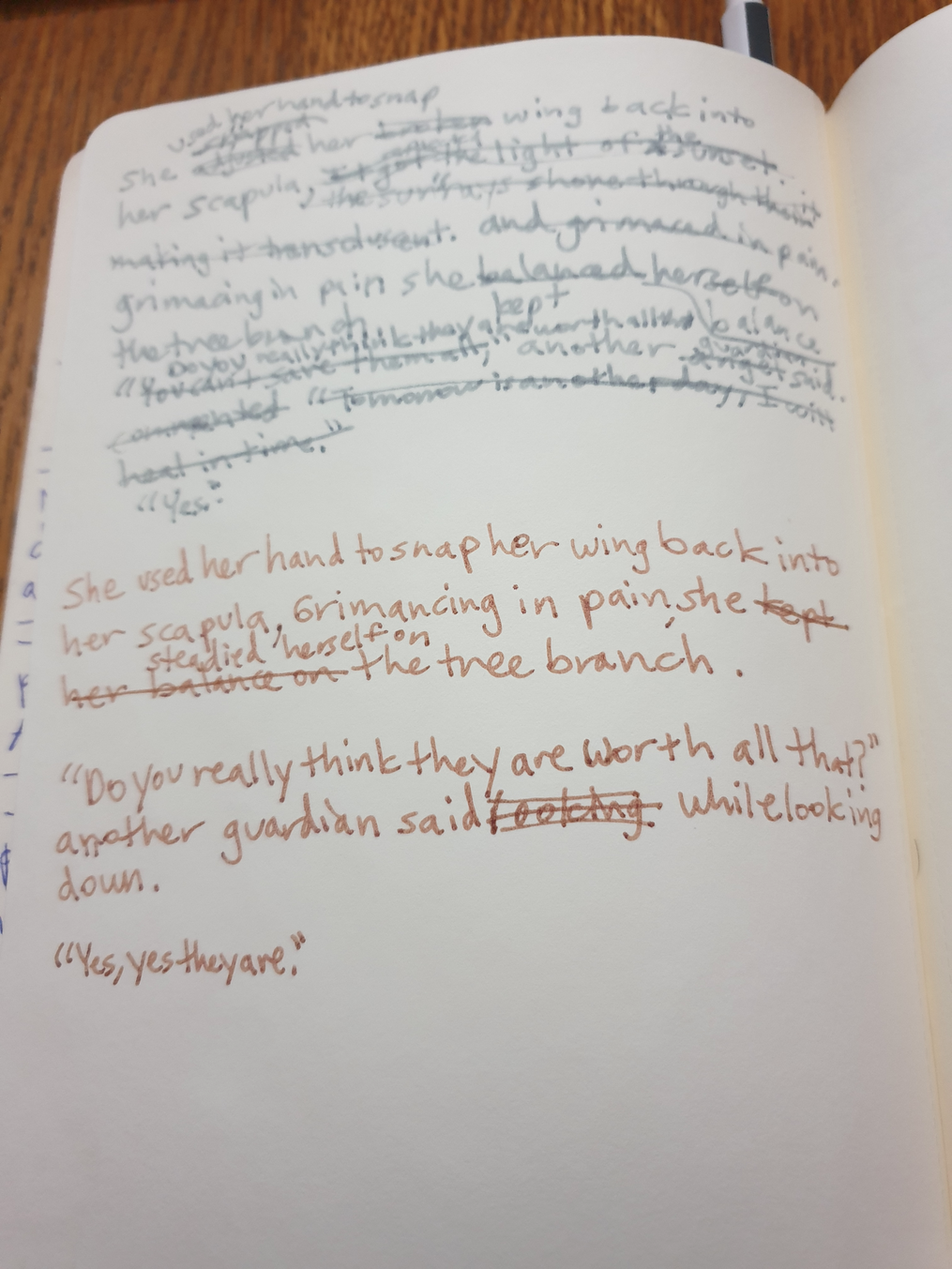 5.Don't overthink it, the play of the short form can push your creativity in interesting directions, let your muse guide you.

Once you have your beginning and ending settled in your sprawling piece, you can start slicing and dicing. Remember this is play and should be fun. For one on my pieces of twitter fiction I focused on the sounds of waves like cymbals and my muse led me to a woman shrinking to fit inside a shell. Yeepee! I have a harsh critique or editor's voice that comes out in the ending phases of drafting and part of the writer's life is how to placate it. It wants to make it work and hard and force everything to take longer than it should. Sometimes I think it wants me to close my notebook or computer forever and stare at one word questioning that choice for eternity. I give it a cup of tea and let the honey and lemon soothe it. Like in any creative pursuit there is no real moment you feel like it is done, you get it good enough and you release it in into the world. Twitter stories will bring this interplay out in a strong way because they are so short, jump into the wrangle, you will grow.

6.Add the hashtag in first and play around in the Twitter box because counting characters can be time consuming and the colors of the app can be more useful than Word.

Once I think I am almost done I type directly into Twitter to see how my character count is going. Yes, Word can do this too, but the color and numbers of character countdown when you go over is really clear. In my process I totally skip Word docs anyway and go straight from my notebook into the app on my phone. This gives a certain amount of spontaneity and play to the whole thing as well. The first thing I do is include the hashtag to connect with the community because you never want to toil with character count and then realize you forgot the hashtag.

7.Bounce the story off another person, especially necessary when you are slashing your character count.

Yes, this is also true for all kinds of writing, the power of feedback and critique, but for stories in a tweet it is essential. As the writer you have the beginning chicken scratches in your mind so it is very clear to you what you are trying to accomplish. I have had moments where I thought I was being totally clear and I read it to my husband and he pinpoints words and phrases and even concepts that don't make any sense in the condensed form. That is why I am happy to have all the brainstorms and drafts in my notebook to bounce off some quick fixes to the issues he identifies and then I send it off into the Twitterverse.