10 Takeaways from The Gift by Lewis Hyde 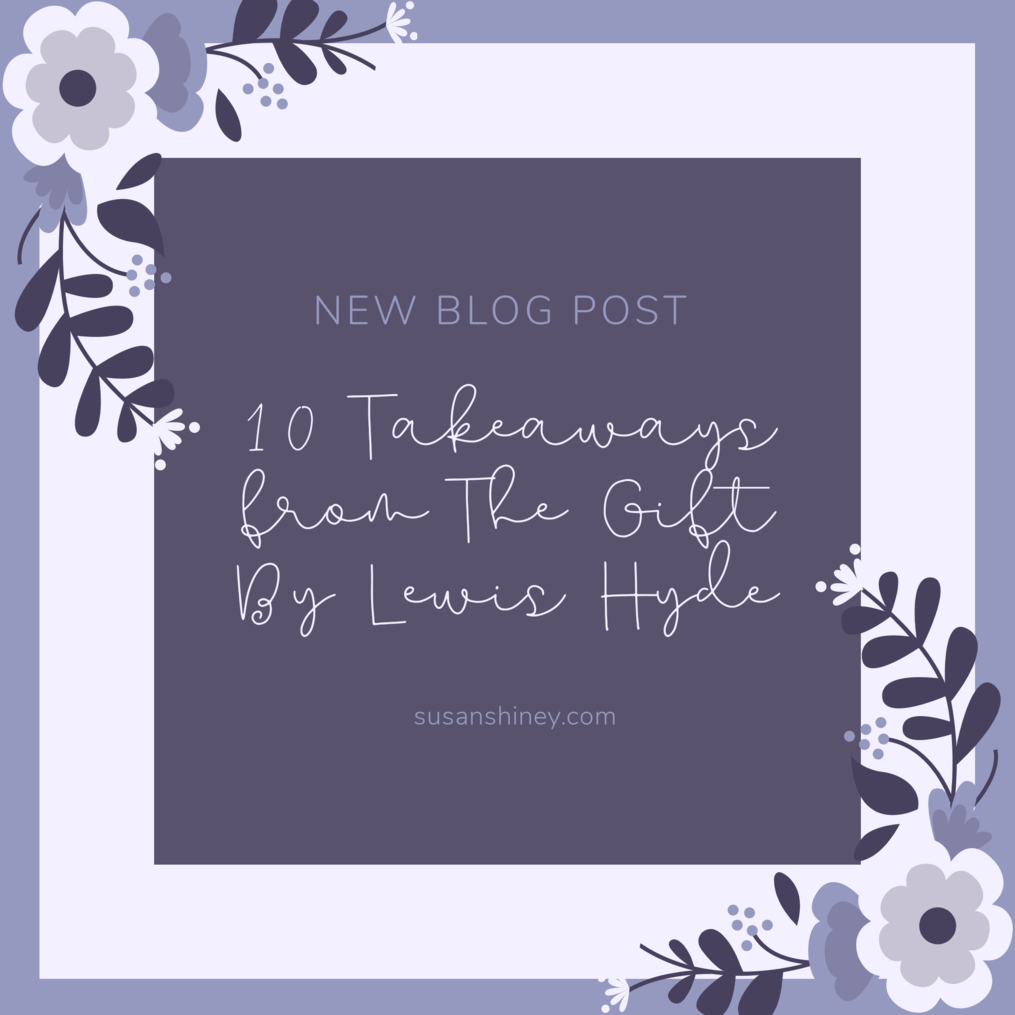 I had heard of this book through the years in different circles when I lived in New York City. When my current Lille/Brussels writing group brought up reading it, I was interested in checking it out. I bought the twenty-fifth anniversary edition published in 2007 entitled The Gift: Creativity and the Artist in the Modern World. The original title was The Gift: Imagination and the Erotic Life of Property, I prefer the latter title and think it captures its essence much better. I love books about creativity and leading a creative life and this book did have a profound effect on me and my view of the world.

So, here are the ten takeaways I had after reading it:

1. Dense books take more time and effort and that is a good thing.

My writing group started discussing the book in November and broke it up into smaller sections and we finished it in February. I personally needed these three months with discussion sessions in place to help hold me accountable to keep reading and to help me make sense of the complex ideas and detailed histories that were delineated in the book. I left each writing group session (we met every two weeks or so) having a deeper understanding and getting my questions answered by the other members of the group. I like having reading goals but I don't want to avoid difficult books in favor of easier ones to meet my yearly quotas simply because I can move through them faster. Going forward I want to sprinkle in a couple dense books each year to keep me on my toes and on a path of being a lifelong learner.

2. Looking to the lives of other creatives to help form my own.

I love memoirs, podcasts, and interviews in general of all artistic types discussing their process and how they form their lives, whether it be actors, comedians, musicians, writers, painters, etc. There are cautionary tales and success stories that impart a great deal of wisdom. Biographies as well have hindsight to put their life in perspective and weigh it against the results of their work. The Gift focuses on two case studies of poets, Walt Whitman and Ezra Pound and their relationships with creativity.

3. Balance is important as a creative.

The universe is constantly trying to teach me this lesson and I heard it again from this book. Walt Whitman and Ezra Pound were used as two examples on opposite sides of the spectrum.

Walt Whitman was described as a poet that was selfless without regard for making money and giving his gift to the world and nursing the ill to the point that he would get sick and have headaches.

Lewis Hyde discusses Whitman on Pg. 222 "In sympathy the poet receives (inhales, absorbs) the embodied presences of creation into the self; in pride he asserts (exhales, emanates) his being out toward others." As creatives we tend to be sensitive individuals that want to connect to humanity and take in the world to the point where it can burn us out. I don't want to go this far.

On the other hand, the poet Ezra Pound was focused on an economy that would more benefit creatives for their work. Lewis Hyde describes this on pg. 316, "Pound was attracted to any economic system that seemed hospitable to the artist and, in his estimation, Mussolini was a leader who knew his people needed poetry." Ezra Pound went to a pretty dark place in favor of fascism and antisemitic rhetoric and what I viewed as hate and sternness toward humanity. I think there is a fire burning in most creatives as a result of their sensitivity and pursuits that aren't appreciated by most of society, you can't let it tear you apart.

4. Be patient with an author's thesis, take the ride, at the end I understood how the pieces connected.

The Gift actually had one of the most powerful concluding chapters I have ever read that artfully connected the dots of his previous essays. I went through moments of extreme frustration with sections of this book. Especially chapter 7 on Usury which went heavily into economic terminology and chapter 9 on Whitman which went deeply into poetry. Two areas that are not in my wheelhouse. I trusted that there would be a good conclusion solely because this book is thought of as such a classic. I am not sure I would have gotten there otherwise. But it was worth it.

5. Learning about creativity in the marketplace through an historical, cultural, economic lense, and through case studies with a cross-disciplinarian analysis is wonderful.

I am curious to find other cross-disciplinary studies into other topics like this. Also, thinking about how I can bring these elements into my own plots, characters, and settings. 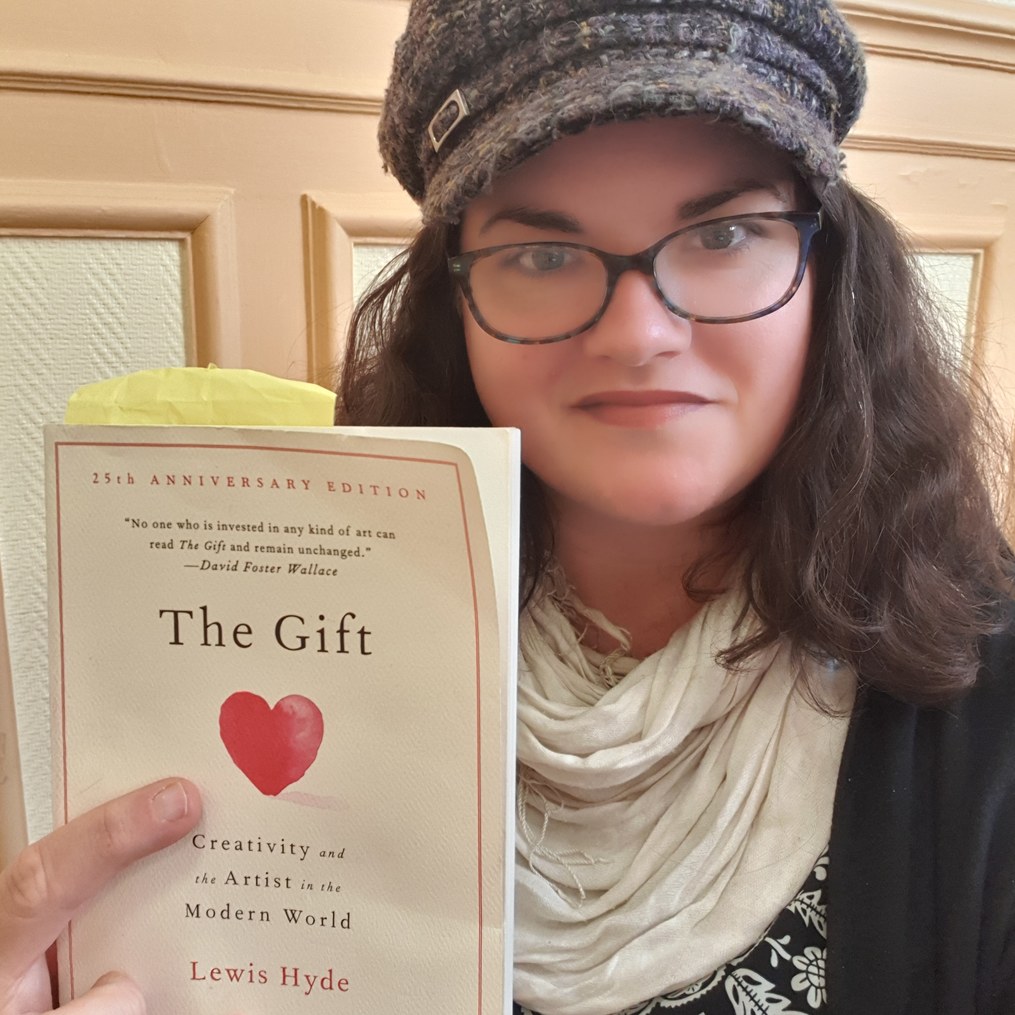 6. Understanding our economies and the history behind them help me to find peace with the so-called worth of my creative work.

It is hard to put a worth on something as subjective as art and writing and our culture and economy do not see it as a priority.

With the Ezra Pound example above mentioning some of the extremes when you move away from a non-capitalist creative friendly government, he makes the reader think about accepting our current economic systems because the historic alternatives were not viable.

Chapter 7: Usury: A History of Gift Exchange was my least favorite section, but now that I have finished the book, I do appreciate having the history of our current marketplace since the dawn of exchange delineated. It is what it is and I need to find my place within it as a creative.

7. I can change my conception of what it means to be fulfilled and seeing rich as a loaded term, the negotiation between purely commercial pursuits versus what I want to do.

This makes me think of the saying it is the journey not the destination, and accepting that the majority of people that chase a professional creative dream aren't successful in the way they want to be. How can I manage my expectations on success and what it means to be a writer? Enjoying the small steps and appreciating the creative moments for what they are and not putting so much weight on them.

Lewis Hyde describes this on pg. 362, "The only point I want to add here is a general one, and that is that each of the paths I have described is most often a way of getting by, not a way of getting rich. No matter how the artist chooses, or is forced, to resolve the problem of his livelihood, he is likely to be poor. Both Whitman and Pound make good examples. Neither man ever made a living by his art."

If I don't make a living or even money from my creativity does that mean it is a waste of time? What value do I put on what it feels like to create? Is it conditional based on the success it receives? I want to keep this in mind, forever.

8. It is motivating to see creativity as a gift from a muse that comes as you give it away.

My favorite part of the book was chapter 8: The Commerce of the Creative Spirit, it spoke to my heart and was more inline with what I was hoping the whole book was about, but I do understand why it wasn't. I had moments in nature writing afterwards and I felt like the creative spirit was speaking to me and I was a silent observer that got out of the way and let a story pour out of me.

I love this sentence from Lewis Hyde on pg. 191, "Just as treating nature's bounty as a gift ensures the fertility of nature, so to treat the products of the imagination as gifts ensures the fertility of the imagination." It summons a sense of respect for my creations, I like not having a sense of scarcity but seeing self-care as necessary to help the muse be rested for more ideas.

9. Voting in favor of the arts is something I can do to be apart of the change in our society toward appreciating creative output.

This was a nice part in the On Being Good Ancestors section of the anniversary edition. It made me appreciate how much Europe supports the arts in public spaces. I live in a place where that is valued and I feel it when I appreciate the fashion, architecture, sculptures, gardens, the lighting on monuments at night, even the window displays. The design aesthetic is incredible, because they want to live in beautiful spaces and put money towards the artists required to maintain those spaces. If I ever feel frustrated about how the arts are valued in my community I could choose to be a more active citizen and advocate for more of those types of programs. I need to remember, I could...

10. I wonder if there will be an update to his ideas with the internet age and patreon for creatives to make money from their work.

I think this is the time for creatives to build their own audience and the indie markets are flourishing without the traditional gatekeepers. I feel that the gifts are being rewarded more now. The future biographies of Independent artists will focus on their livings with youtube channels and their own websites to finance their creativity. It seems that the economies for creative output are changing with the proliferation of the internet. That makes this very moment with seemingly limitless opportunities for creatives to find their own patrons, exciting.

Have you read The Gift by Lewis Hyde? What did you think of it?