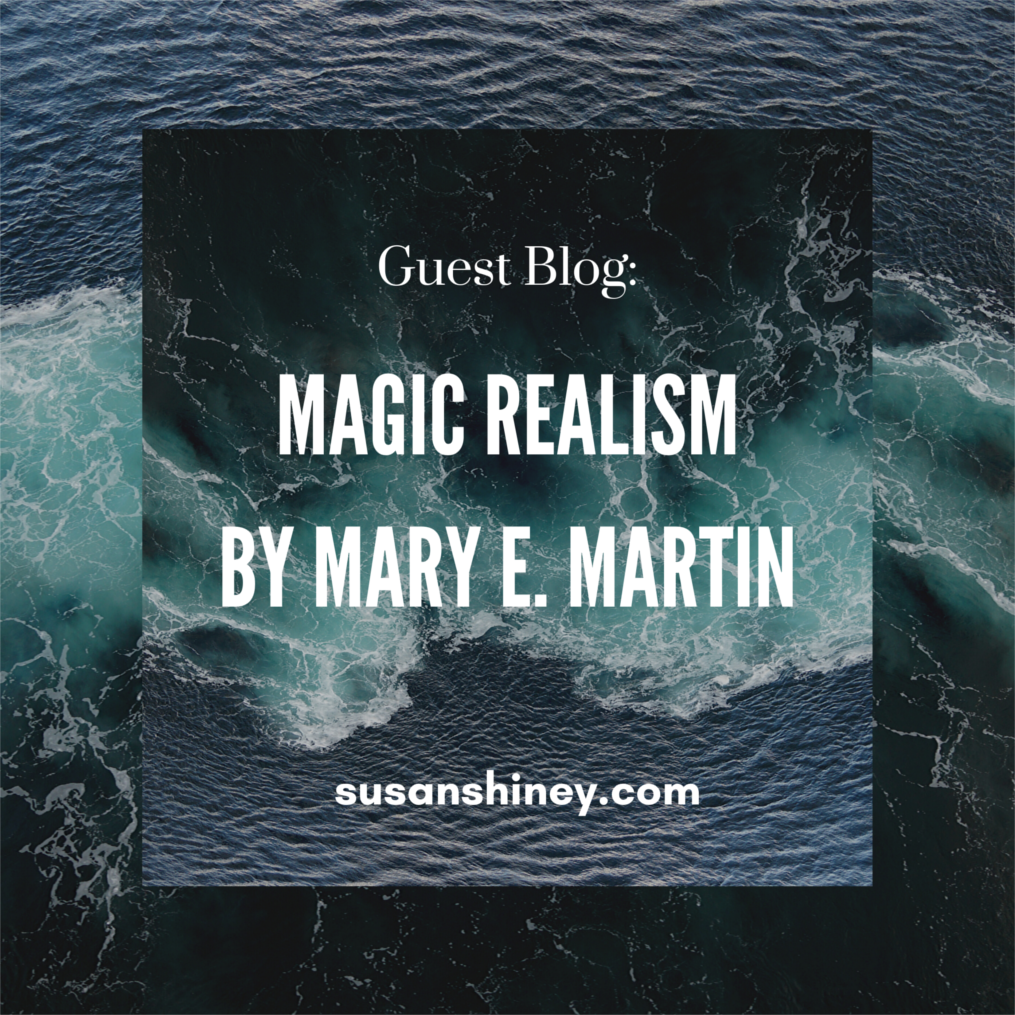 An elderly writer once gave me this advice. "You can't write that magic realism unless you've lived it too."

I've often thought a magic realist must be like the painter, Marc Chagall, who said, "I live my life beside the pond with one foot stuck in, and the other planted on solid ground." That certainly suggests Chagall moves effortlessly from our realistic dimension, which we share, to a more personal, unconscious level where inspiration and creativity lie.

Those two thoughts seem to capture the essence of magic realism. The writer, who calls him or herself a magic realist. is really saying that the world he lives in is just as real as yours. But it contains something else—a sense of the beyond where another dimension [or even many dimensions] lie hidden and are only sensed occasionally by those sufficiently attuned. Dr. Carl Jung states that the best artists have the best access to the unconscious world which the magic realist artist knows well.

I created a character named, Alexander Wainwright, Britain's finest landscape artist. In his work, he captures a certain quality of numinous light which leaves the viewer with a sense of awe that she is in the presence of something impossible to define but, nonetheless, very real. With this style or genre, the artist can fold in perceptions gathered from other dimensions and so there can be greater subtly and many more layers of meaning.
Alexander Wainwright is the protagonist of The Trilogy of Remembrance [The Drawing Lesson, The Fate of Pryde, Night Crossing] and The Wondrous Apothecary.
The best way for me to explain what magic realism is [to me], is to draw upon certain scenes in all four novels. Definitely, Alexander is a person who senses whatever may lie beyond. He may not understand it, but he tries to interpret or learn something from it. And often the "event" is a useful device for turning the plot which few may see coming. 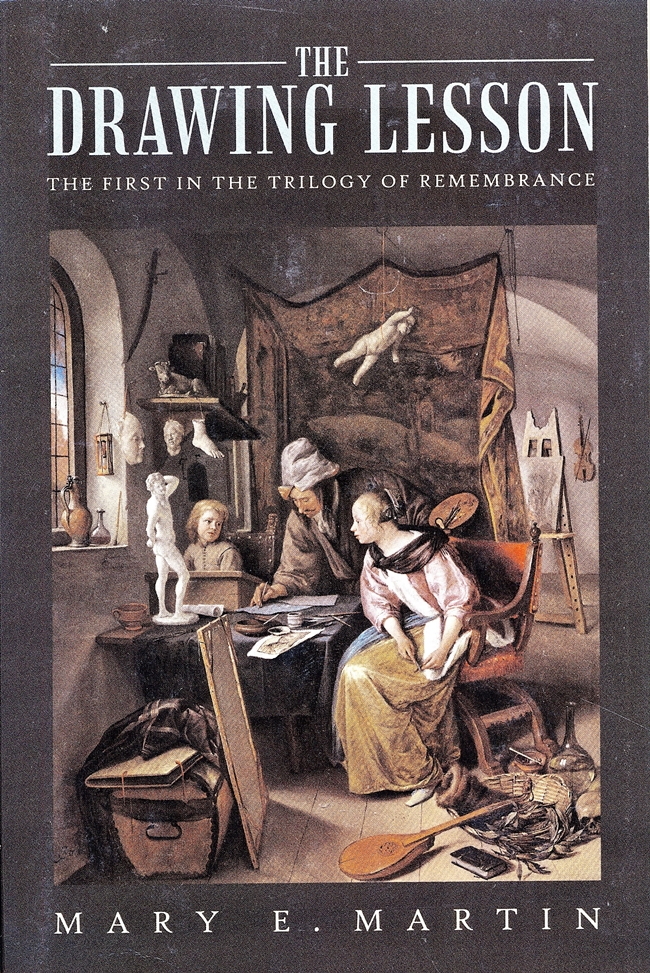 For example: In The Drawing Lesson, Alexander is subject to a vision even though he lives in a world just like ours. The story begins in London, England and, in his studio overlooking the Thames, he is painting a landscape. But he is most unsatisfied with his work. Where has his muse gone? Suddenly ugly creatures leap from his paintbrush and desecrate his canvas.

He calls them the Trolls. Why not meet them here?
http://maryemartintrilogies.com/the-birth-of-the-trolls/
Such an event does not usually fit into our world! It's inexplicable! Alexander has a very strong sense of "things or events" just beyond our world which is where he gets much of his inspiration. Like Chagall, Alexander has one foot in the water [unconscious?] and another on land. Where did the Trolls come from? Perhaps from Alex's imagination? Alex is so shocked and yet so intrigued with the appearance of the Trolls that he is driven by them to take the Orient Express to Venice in search of his muse. He comes to accept such events as quite normal and so do we. In Magic Realism, there's no need to explain an event like that. It increases the subtlety of the different layers of interpretation and meaning you can create. 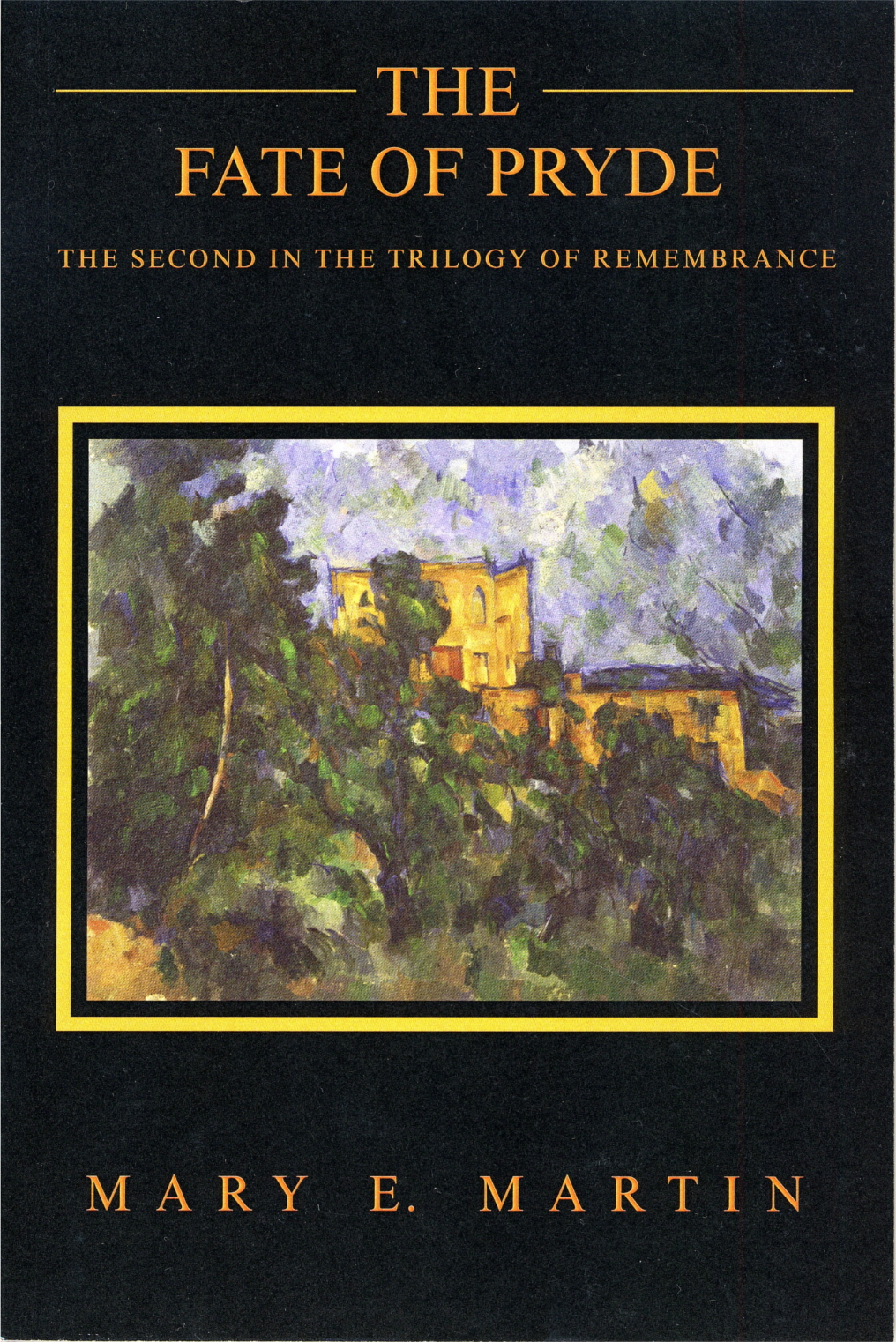 The most important question in The Fate of Pryde-- can the very best and the very worst of mankind thrive in one human's breast? Here you can meet Pryde. http://maryemartintrilogies.com/fate-jonathan-pryde/

I surprised myself at certain times during the writing of it. For example, in one scene, Alex and his friend Peter [a famous author] are attending a book signing by another author/professor. As I approached the scene, I had a vague sense of foreboding which I wanted to express. During the professor's reading, I found that I was writing about a canary which started flapping, chirping and whistling in the cage in the bookstore. When I read over the final draft I laughed aloud. Then, with a straight face, I acknowledged that a chirping canary in a coal mine was a serious warning sign of danger. How does this relate to magic realism? For me, it is proof of it. My consciousness was writing about the realism of a book signing. Yet something `was flying up from my subconscious—the canary—just the "perfect" expression o f slight, creeping foreboding! 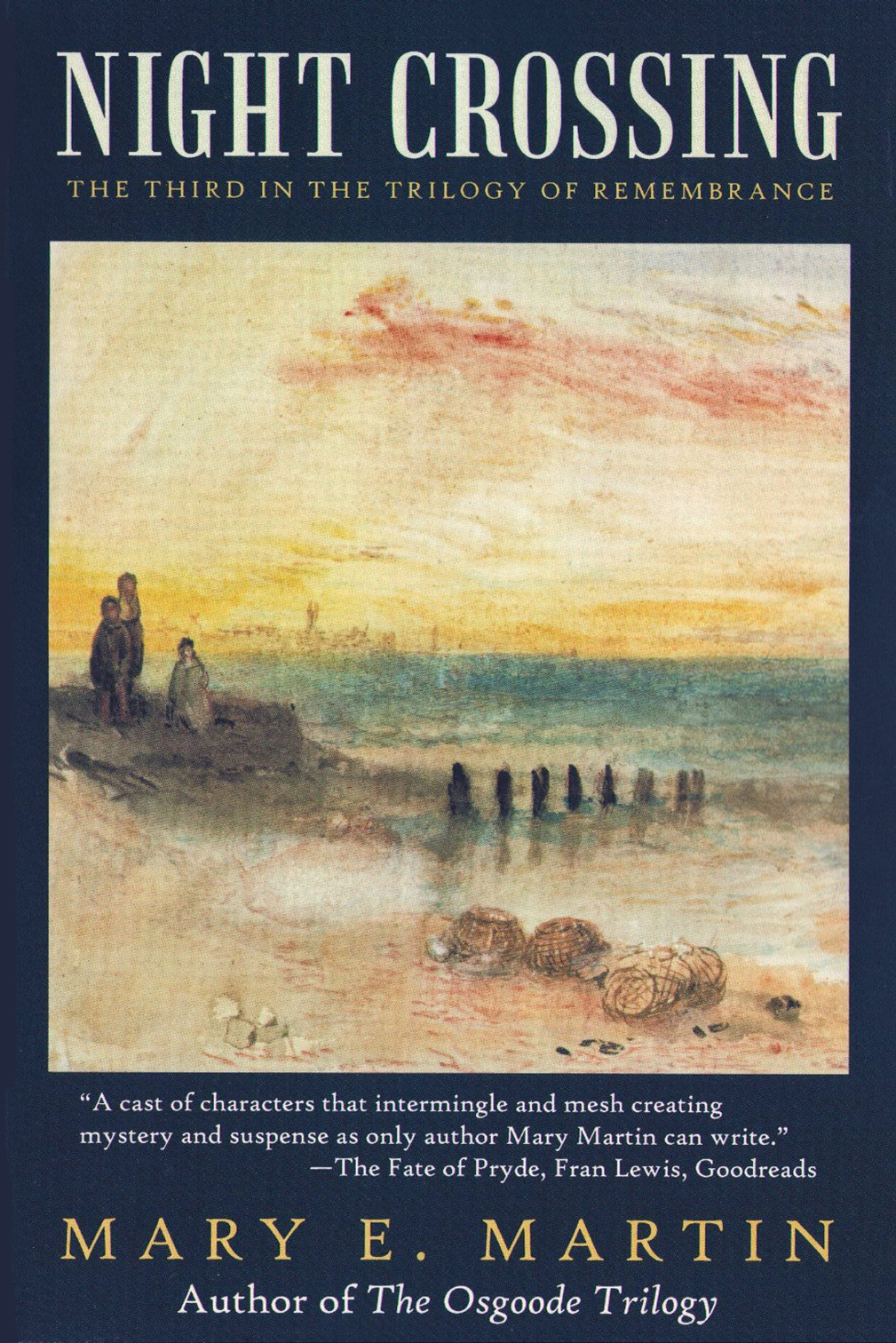 In Night Crossing, a complex question arises. Can love ever be so strong that it transcends life

and death? A very strange old woman [Miss Trump] approaches Alex on the train to

Portsmouth to take the ferry to France. When the boat is caught in a storm, it sinks and ends

Where does magic realism come in? One example is how Alexander finds the person he is looking for in Paris. In one scene, he is strolling about Paris. Literally, a flower-pot drops from a window above effectively making him change his route. With that change he arrives at the Luxembourg Gardens restaurant where the very man he is seeking is playing the piano. They meet and talk. In another scene, which is likely a dream, he is led about the darkened back streets of St. Petersburg by a cabbie. This brings Alexander to several other-worldly experiences such as seeing a poverty-stricken family which existed perhaps centuries ago. He cannot understand how such could happen, but he draws some lessons from it. Some of Alexander's answers come to him because he has this ability to sense matters not apparent to everyone else. 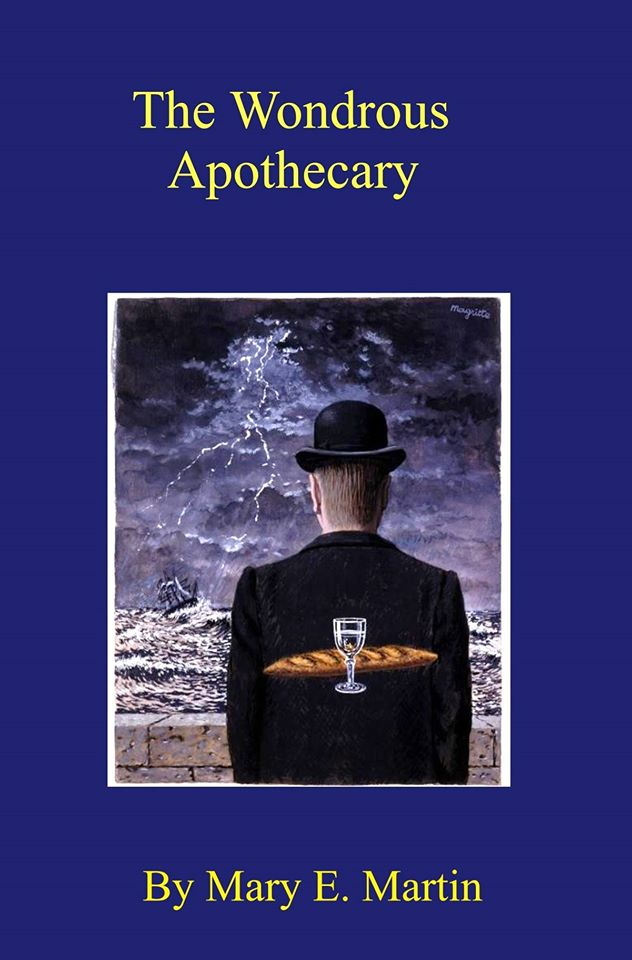 In The Wondrous Apothecary: This novel was written fairly soon after publishing Night Crossing. I have not yet mentioned Rinaldo, the artist whom you find throughout the trilogy. As a conceptual artist, he is the polar opposite of Alexander in both art and personality. At that point, I felt that, to complete the series, I had to bring the two artists together in an artistic project. Where does magic realism come in?
Another important question in this novel is—what is friendship? Is it enough to enable Alex, who regards Rinaldo as a nemesis] to rescue Rinaldo from threatened medical abuse? Sometimes. I create characters to bring needed information in strange and arresting ways. Near the end of Night Crossing, Alex is headed for home but has to stay overnight at a Parisian hotel. He needs an answer as to how he should handle telling the Parisian pianist certain facts about the deceased Miss Trump.

In all four novels, Alexander finds answers to all these questions and many others, simply because he has the ability to perceive or sense information not available to everyone. That does not mean he is always right. One can easily misinterpret signs given to us by synchronicity and expressed through magic realism. For example, at one point, he is in a hotel near the airport in Paris. He is debating whether he should tell the Parisian pianist certain information about the deceased Miss Trump. A soft tap on the door! A young and very pretty woman enters, with the mistaken thinking she has been called to his room as a prostitute. Instead, they just talk. Alex tells her his story and immediately she says it is the saddest but nicest story she has ever heard. The coming together of two events to help Alex not by causation but by synchronicity! Another example of magic realism!

Synchronicity is what I am most familiar with. It is a number of events or circumstances which do not appear to be connected by one causing the other in this world. They come together in a particularly meaningful way to the observer but we can't necessarily understand why or how. Writers who experience events, like Alex does, can convey that sense of mystery and maybe even a little awe to the reader because that is the way they experience the world.

But here is my best example of synchronicity. While writing my first novel, Conduct in Question in The Osgoode Trilogy, I was trying to describe what would happen if gasoline were poured on a carpet and set on fire. Would it explode or just burn? As I wondered where I could find out, a loud knock came at the door. There stood two firemen wanting to do an inspection. Whom better to ask? Their answer "It'll blow up real good ma'am!"
Why bother with magic realism? Because it is real in real life!
MARY E. MARTIN