Interview with Ness Mercieca of Verse Atlas: The Map Zine 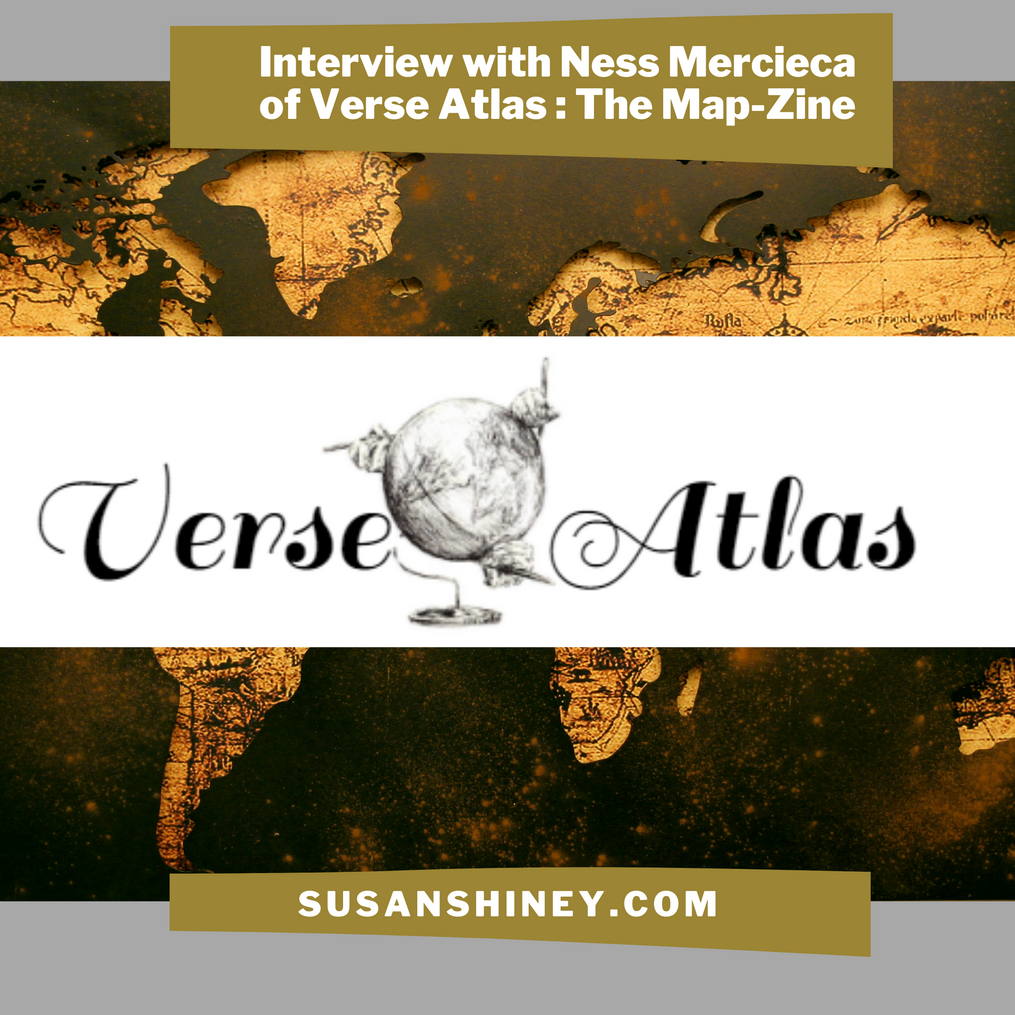 What is Verse Atlas?

Verse Atlas is a digital zine in the form of a map that showcases poetry and art from around the world. The only criteria is that the work must be about a physical place, and is then pinned to that location on the map. The connection to place that can be fairly loose. It could be a place you miss. It could be a place where you were just inspired by the landscape. It could be a place you hated. Whenever I have had an intense experience related to place, I have often wondered what other people have had an strong reaction to that place, and thought it would be really interesting to see those responses along-side each other. I have had the idea of a map that is devoted specifically to art and to poetry for a long time and the only reason it doesn’t include other art forms is because poetry and art traditionally have a connection with landscape, and are more succinct; they can really wrap up that feeling a bit more tightly than prose or video. 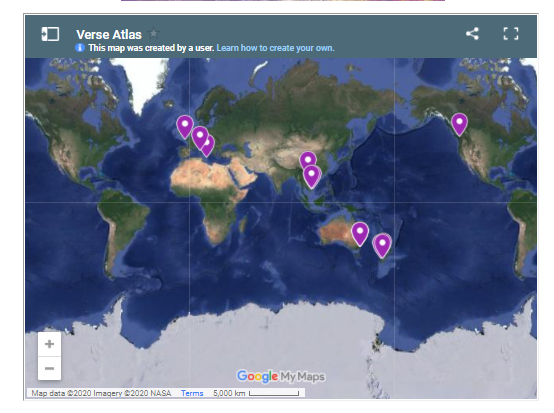 Where did you get the idea for Verse Atlas?

It was the last few times I have traveled. Travel is such a privilege, especially now that we can’t even go to the next state. Now it’s beyond privilege, its impossible and even irresponsible. The specific place I had the idea was in the islands that I descend from, La Maddalena and Malta. I lived on each of them as a child, so returning gave me feelings of nostalgia, and connection to my heritage. For my grandparents, however,  these places represent war, migration, their young love. Their experience in that place was so different from mine. Outside of my family, the archaeology of the islands represents the layered history of experiences on the islands, particularly in Malta. It has just been passed around like a bag of Doritos, everyone wanted a piece of that harbor. Turkey had it, France had it for a while, Britain too. Just like the physical remains of the island, the Maltese language contains relics of all these colonisers. There are modern experiences of that island too, such as the refugee population. So Atlas Verse came from thinking of all the different things that have happened to a place, and wanting multiple perspectives to be able to sit next to each other on a map. 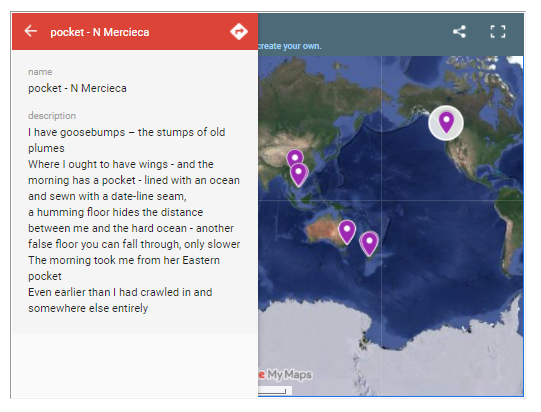 'Pocket' is an ode to jetlag and flight itself.

Who is your ideal reader?

What is the process for poets and artists that are interested in applying?

You can go to my website and there is a submit page that walks you through the guidelines and instructions. The only difference from any other zine is that you need to tell me, geographically where the poems or artworks happened so I can pin them to the map. They don´t all have to be from the same place. You can have a series of poems that streams across a journey, across time, and you can be creative with how this is presented for example, you can give me dates that the artworks were made or you can have multiple poems in the same place. My ‘Tongues” series starts in Malta, then goes to La Madaellena, and ends in Australia because that chronicles the journey of myself and my grandmother. 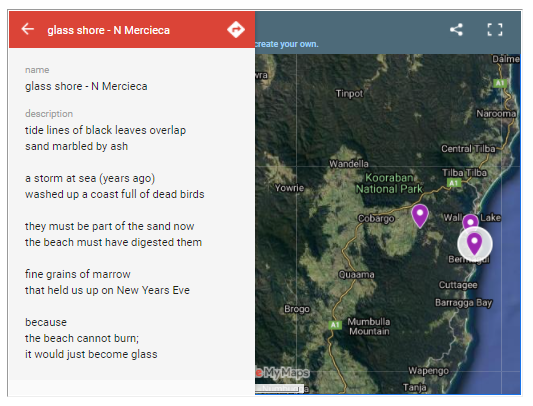 Glass Shore - A poem devoted to the beaches on the south coast where Ness Mercieca is from. The beaches were a shelter to thousands of people during the New Years Eve bushfires.

What kinds of work do you have on Verse Atlas now?

At the moment there is only my own poetry, but, I would really love to cover it in layers of other peoples’ work. We have travel poems, for example, in France, poems from when I lived in Vietnam. We also have ones set in Australia about the bush-fire recovery, the experience of home, and the community response after a mass trauma. But, what is missing at the moment, I would love some indigenous perspectives from around the world. I would love perspectives from people who are new to a place or have had to move against their will, from diaspora, refugees, everything. Travel isn’t always voluntary, and then from the other point of view maybe someone who has never been able to travel and their perspective of the place they are in could be really complicated as well. Anyone who has something really strong to say about a place is welcome to express it in Atlas Verse. Bilingual and translated works are welcome. I will not publish anything that I consider discriminatory or hateful of any demographic.

What do you love about maps?

I love everything about maps! The social media platforms for Verse Atlas is also an excuse for me to spam everyone about maps. I love fantasy maps, and maps that represent a specific thing such as imports, resources, animals, freedom. I just think it is so interesting to see that aerial view of the world you are moving through. It is just such a contrast from the way we see the world from the ground. And, I think that mapping happens from a really early age, when we are kids drawing we are mapping; orienting ourselves in terms of what’s most important to us at that age. I love old maps that are distorted and show the assumptions, biases and imagination of the cartographer.  Maps are simplifications and abstractions of the world around us and help us to make sense of it. For me mapping doesn’t strictly belong to geography, but is any act of spatially graphing and organizing something, giving weight to the elements that are most important to you. 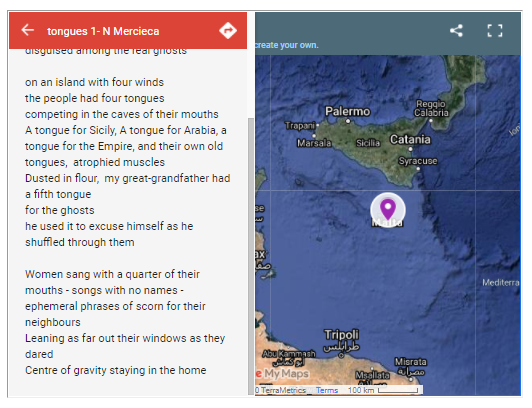 'Tongues' is the first in a trilogy of poems spanning 3 countries and exploring the migration of Ness Mercieca's grandparents.

Have you designed maps before?

Yes, I have for my fantasy worlds. I have been trying to learn a bit more about how to map realistically, things like rain shadows, and how rivers actually flow. There is so much to learn about it and any actual cartographer or geographer will look at my maps and think they are physically impossible and don’t make sense, but we have a bit of leeway as writers. My maps may get better with time. I have also dabbled with maps for Dungeons and Dragons game concepts, and of course as a kid I would map the ice cream shop, the park, and some nice trees I liked. 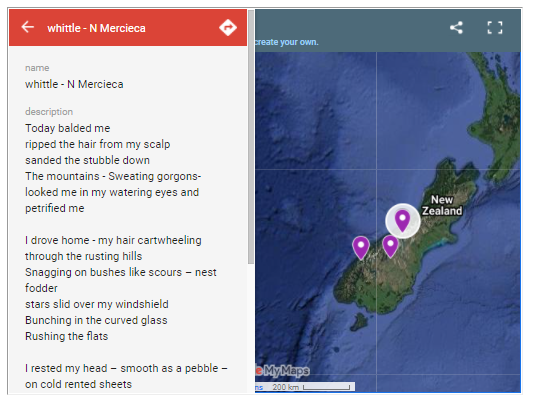 'Whittle' was written in Aoraki/Mt Cook New Zealand to express the extremity of the landscape and its effect on the body.

Was the technical side of the website difficult to set up?

On google maps there is a section where you can make a map and pin your own things to it, and I just did it through that. I just find a place, pin it, put the title as the place name and the poem as the description. I can put the name of the artist or poet and have a link with their socials or website in the description too. So where you would normally have the name of a town or cafe, like ‘this cafe is open from nine to four’, instead you will have a poem. Instead of the picture of the cafe you can have some artwork. I just embedded the html into the website, and was able to google the confusing bits as I went.

Anything else you would like us to know about Verse Atlas?

The one other special thing about Verse Atlas is that your poems can be sort of flexible, if you want to make an edit to your poem, I often edit my poems when they are up there, they are sort of live poems. I posted them before I thought they were done and I edited them on the map. And, if a poet wanted to do that they could contact me to edit their poem as well. I like the idea that the way we think about and remember landscapes shifts. I heard once that every time we revisit a memory, we alter it slightly, and I like the idea of poems about place echoing this. I like the idea of having that option available to other poets as well as to myself. I don’t know if there are many other zines that can say they are hosting a living poem that changes.

The globe being written on was designed and illustrated by Ness Mercieca to represent us simultaneously recording our experiences of the world together.

Ness Mercieca is a writer, illustrator and art teacher. She is currently revising her debut fantasy novel and a host of short stories that are set in an alternate world's industrial revolution. Her stories focus on characters whose actions mark the beginnings and ends of cultures and religions within her fictional world. Her prints and original illustrations can be purchased through her website, and you can follow her writing journey through her social media platforms.