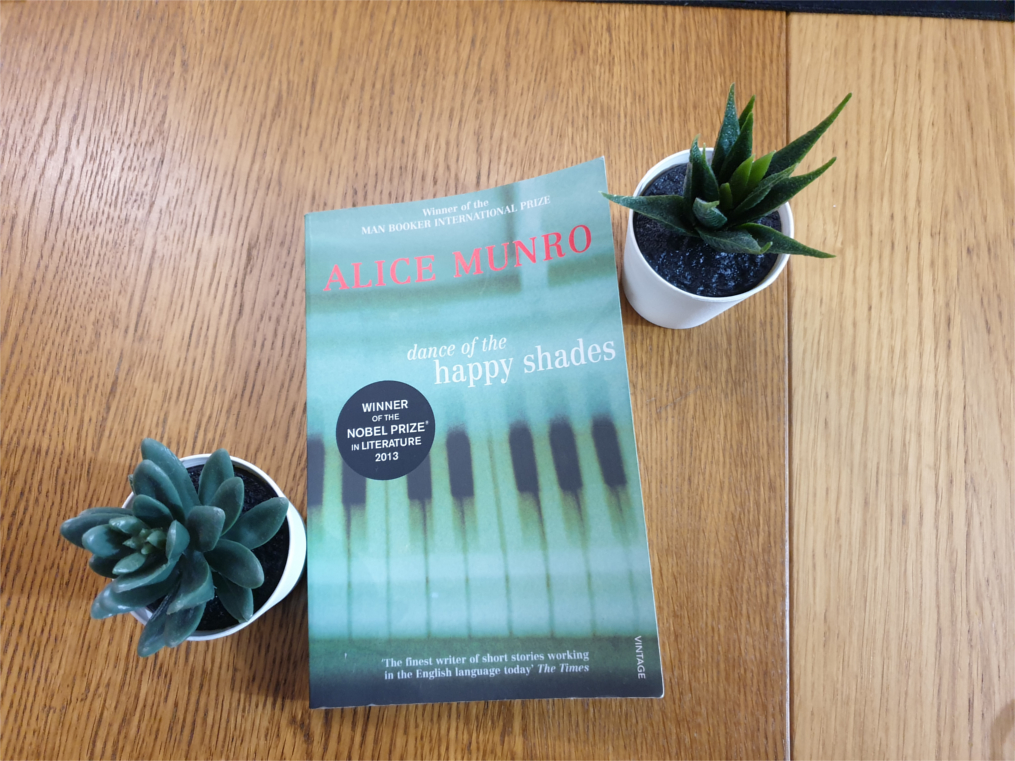 An Analysis of the Short Story: Dance of the Happy Shades

Alice Munro is a Canadian short story writer that won the Nobel Prize in Literature in 2013. I remember hearing bits and pieces about what a gifted writer she was, but I never made the time to actually read her until my writing group decided to start analyzing short stories this year. Alice Munro is the first author we have been studying.

Spoilerish Alert: It is your choice if you want to continue reading if you haven't read the story before. You could read this piece and let it inform your reading of the short story or you can save this blog for after you have read the story. I won't give away the ending either way, I want to focus on her craft.

General overview of the story: Dance of the Happy Shades (1968) is written in the first person point of view (p.o.v.) from the perspective of a girl that is probably in her early teens, maybe even as young as ten or eleven. She and her mother go to a piano recital that her piano teacher, Miss Marsalles, is organizing at her house. Miss Marsalles has been the neighborhood's piano teacher for generations and is now getting older. Once the girl and her mother are at Miss Marsalles' house, they begin counting down the seconds until they can leave, however, a group of new students arrives to perform, causing them to question their own beliefs of status and society.

1. First person p.o.v. can be used as a device to say something more

The narrator's voice is heavily influenced by her mother's opinions. There is truth in having the daughter tell the story that the mother might not even be able to admit to herself if she were the one telling the story. I got the sense that the mother has made several judgmental comments all of her daughter's life about Miss Marsalles not realizing the way her daughter would absorb them into her worldview. An even greater statement that Munro could possibly be making is the way parents pass on class and gender values to their children.

For example, in this passage the daughter is discussing the presents Miss Marsalles would prepare for the students at her piano recitals:

pg. 216 "The embarrassment the mothers felt at this time was due not so much to the presents themselves as to a strong doubt whether Miss Marsalles could afford them; it did not help to remember that her fees had gone up only once in ten years (and even when that happened, two or three mothers had quit.)"

This is right from her mother's mouth, kids don't focus on things like that. More on the voice of the daughter below...

In my opinion, the internal genre was a Worldview: Maturation story arc for the girl narrating the story having a moment of self-actualization and questioning at the end. However, the external genre was a Society: Domestic Woman's arc focusing on the character of Miss Marsalles and how the community views her which is different at the end.

I believe F. Scott Fitzgerald also did this in The Great Gatsby which follows Jay Gatsby, but the story is narrated by Nick Carraway. I never thought about that dynamic until I read this story. The fact that Munro can accomplish this in fourteen pages might have something to do with that whole Nobel Prize situation... 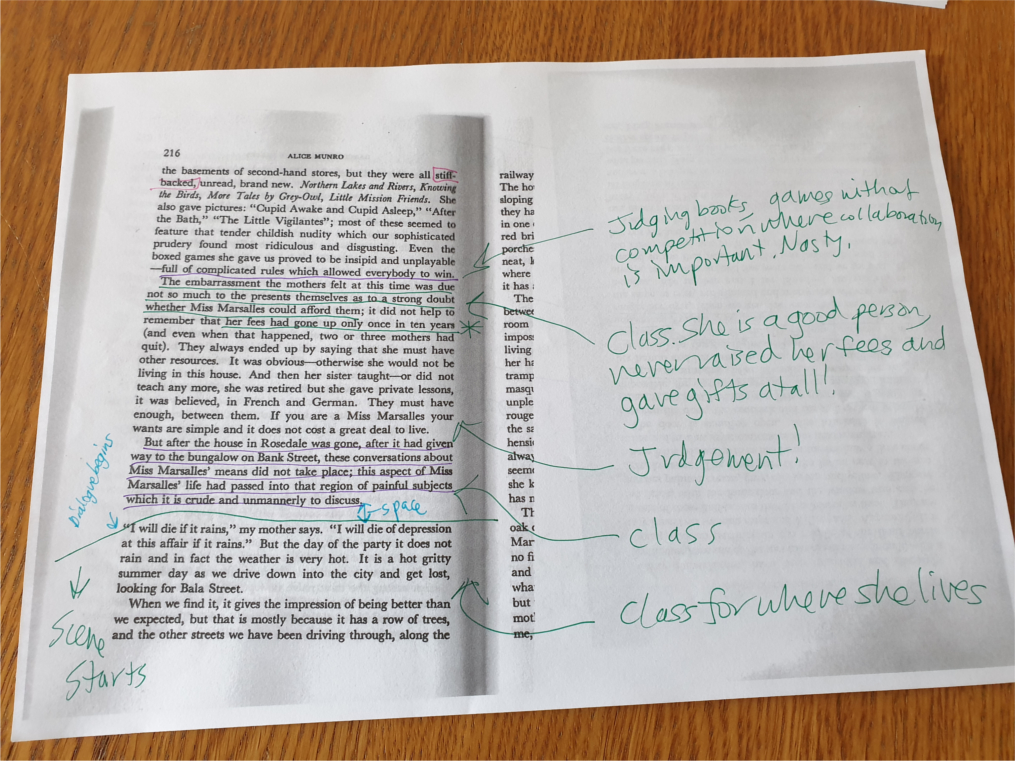 For example, in this passage the daughter discusses Miss Marsalles and her sister:

Pg.214 "It must finally have come to seem like a piece of luck to them to be so ugly, a protection against life to be marked in so many ways, impossible, for they were gay as invulnerable and childish people are; they appeared sexless, wild and gentle creatures, bizarre yet domestic, living in their house in Rosedale outside the complications of time."

A lot wrapped up in this, if you are a woman and you are not beautiful nor have children you are basically a non-entity in society, this oppression is being enforced by the other women in the community.

4. An unreliable narrator can make for a frustrating experience, it needs to be done with skill

The unreliable aspect in this story is that I do not agree with nor trust the conclusions this narrator makes. It was uncomfortable at times, but I loved the showing that was happening and my own interaction with the text to put together the reality from the evidence she provides.

For example, in this passage where the daughter discusses Miss Marsalles approach to teaching:

Pg. 213, "It is one of Miss Marsalles' indesctructable beliefs that she can see into children's hearts, and she finds there a treasury of good intentions and a natural love of all good things. The deceits which her spinster's sentimentality has practiced on her original good judgement are legendary and colossal; she has this way of speaking of children's hearts as if they were something holy; it is hard for a parent to know what to say."

Spinster? In addition, to attacking her looks, her age, her lack of children, now she is mentioning her not being married as another aspect that makes almost anything she does invalid. The fact that she mentions a parent here shows the mother's influence on her thinking as well. As a teacher, I had a hard time reading the narrator's interpretations of an idealistic teacher that throws a party for a piano recital and gives the students presents while the mother's judge her clothes, the food she serves, the status of the guests at the recital, and her house relentlessly the whole time. There is a purpose at the end, which shows the beautiful humanity of Miss Marsalles, thus the great skill of Alice Munro in making this p.o.v. choice.

5. The use of italics can be powerful

For example, in this passage where the daughter details her mother's first reaction when hearing there is another piano recital coming up:

Pg. 211, "In the end all she can say is: Oh, but won't all that be too much trouble, now? Now being weighted with several troublesome meanings; you may take your choice......now that Miss Marsalles herself - as my mother says, we must face these things - is simply getting too old."

Alice Munro sets up her mode for using italics throughout the short story in this first paragraph to represent words that are really unspeakable or 'weighted' with societal implications. Just another level of brilliance... 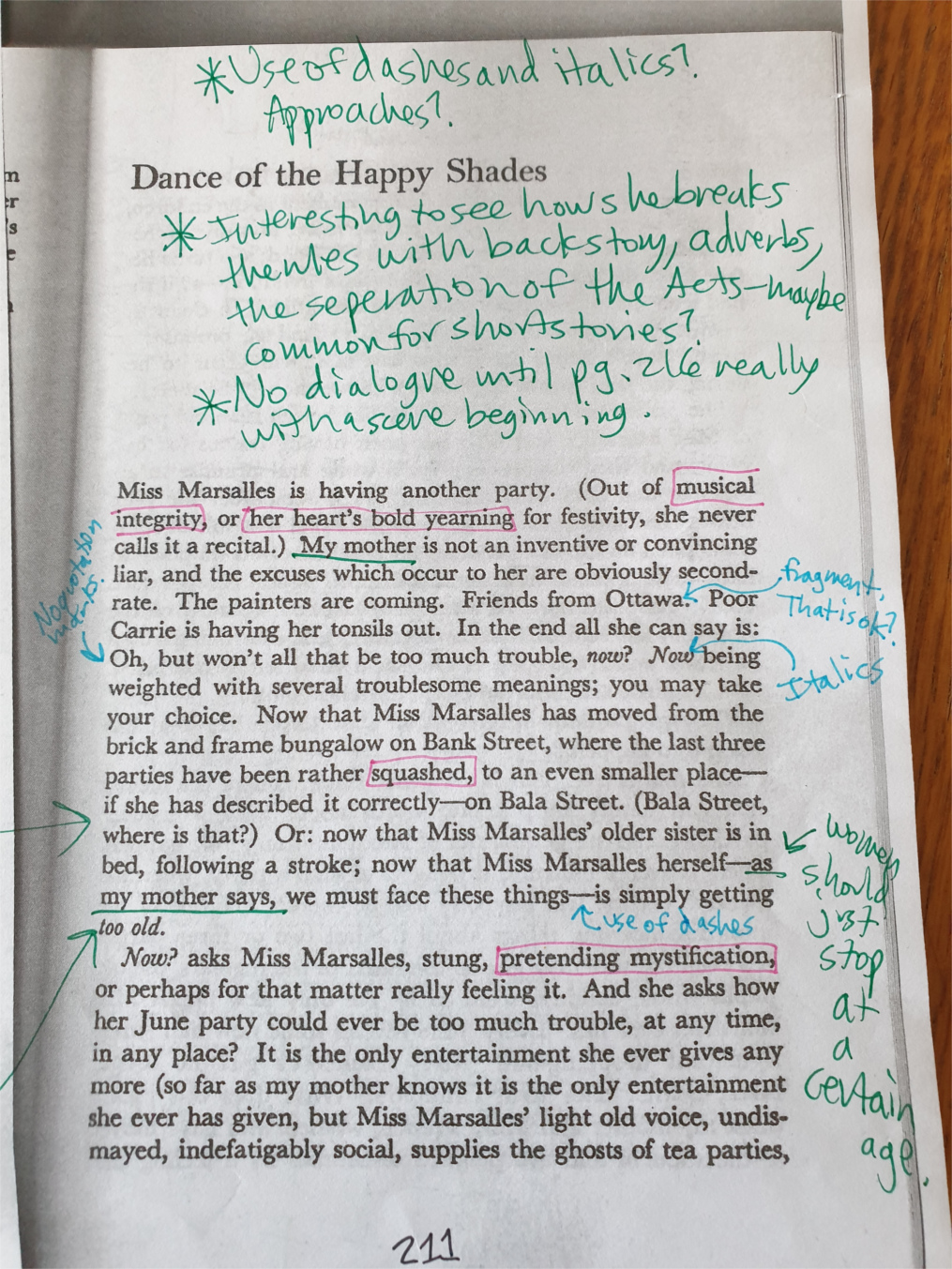 Implications for my own writing

I am working on a novel now with first person p.o.v. and an unreliable narrator and I need to be more thoughtful about my approach. What is my purpose for the moments where the main character is lying?

Subtext, subtext, subtext, is everything for showing and not telling. I need to reflect more on what I want to say in each scene and how to pull back and give just enough to trust my readers to connect the dots. My own characters are too self-aware, I need to make things less direct and overt. They'll have to find their own therapists like the rest of us.

-Reading a story for a writing group is invaluable, because you are preparing yourself to take things in differently with the expectation you will need to share about it afterwards. Then, hearing everyone elses' insights at the meeting makes me connect with the story on a deeper level as well. Finally, writing about it makes me organize my thoughts and pushes me to find passages for evidence.

-When I want to analyze a story I make a photocopy of it so I can write my notes along the side and highlight it in several different colors usually using one color for words or phrases that stand out to me and other colors that represent important parts related to the plot. I like to mark it up to be active so I can take more away from the reading experience.

Have you read Dance of the Happy Shades by Alice Munro? What did you think about it? Was this blog helpful even if you haven't read the story? Are my ideas totally off?